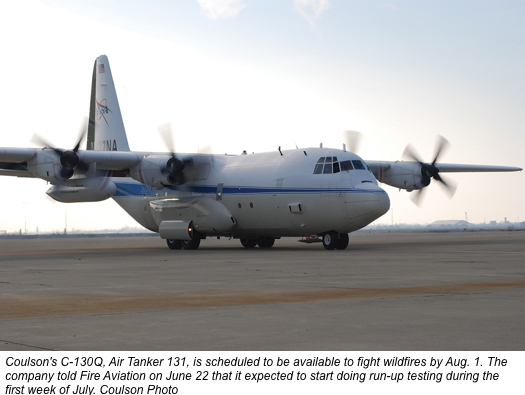 Development of the next generation of firefighting aircraft is underway on both sides of the Canada-U.S. border.
Canadian aerial firefighters have benefitted from a major investment in new air tanker and waterbomber aircraft during the last decade, while their American counterparts have struggled with a 75 per cent reduction in the US Forest Service’s (USFS) air tanker fleet – from 44 to 11 aircraft – in the same period.
Now, the USFS’s next generation air tanker program is taking off. In May, five companies were awarded contracts for seven aircraft: Aero Air (two MD87s); Aero Flite, Inc. (two Avro RJ85s); Coulson Aviation (USA), Inc. (one C130Q); Minden Air Corporation (one BAe 146-200); and 10 Tanker Air Carrier (one DC-10-10).
New aircraft to be operated by Aero Flite and Coulson Aviation (USA) are being developed with Canadian industry support, while Air Spray recently launched development of its new BAe 146-200 air tanker at a U.S. subsidiary.
Coulson Aviation (USA), Inc.
The only large turboprop air tanker contracted by the USFS is Coulson Aviation (USA)’s Lockheed C-130Q, currently being modified in a hangar in San Bernardino, Calif., after completion of a 20,000 hour, 30-year overhaul that included a glass cockpit upgrade.
The U.S. firm is a wholly-owned subsidiary of Coulson Aircrane Ltd. of B.C., which fights wildfires with Sikorsky S-61N helicopters and a Martin Mars flying boat.
The C-130Q began life as an electronic communications relay for the U.S. president, and was later flown by NASA. A 3,500 US gallon Aero Union RADS1 constant flow tank system is being installed in the cargo compartment to drop retardant through the belly. The tank can be removed in 30 minutes for cargo operations, and the installation does not compromise aircraft pressurization or restrict aircraft weight and performance.
“We strongly believe our C-130Q Next Gen Airtanker is going to lead the way forward as a world class firefighting tool, with a state of the art constant flow tank proven to deliver the desired coverage level on the ground,” said Britton Coulson.
“And the aircraft’s constant RPM variable pitch propellers let us get into areas and carry out drops that would be impossible for jet aircraft to perform.”
Flight tests were scheduled to begin in late June or early July, followed by drop tests to receive USFS Inter-Agency Airtanker Board (IAB) certification.
Coulson’s contract with the USFS is written to accommodate the addition of up to four more C-130Q or C-130H aircraft (one per year).
Conair RJ85 Air Tanker
Aero Flite, the largest operator of Canadair CL-215 water bombers in the U.S., based in Kingman, Ariz., has contracted Conair Aviation of Abbotsford, B.C., to provide it with two Avro RJ85 air tankers, which will use Cessna 525 CitationJet birddogs.
The Avro RJ85 was developed by British Aerospace as the second generation of the BAe 146-200 family. It features a glass cockpit, aerodynamic improvements, higher power FADEC-equipped Honeywell LF507 engines, and carries 4,000 pounds more payload than its predecessor.
“The RJ85 is capable of 400 knots, which gives it a high long distance transit speed,” said Rick Pedersen, president of Conair, in early June. “We’re getting ready to flight test the first RJ85 in less than 30 days, and we recently completed the static test program for our 3,100 US gallon tank, and slow flow testing went extremely well.”
Three former Lufthansa CityLine Avro RJ85 passenger jets are now in Abbotsford. Illustrations of the new RJ85 air tanker show it with an externally-mounted tank that resembles the 2,600 US gallon tank Conair installed on two Bombardier Q400-MR Airtankers sold to Sécurité Civile in France.
“We’re happy to see a contract for two aircraft and hopefully a lot more in the future,” said Pedersen. “We see a potential export market for the RJ85 air tanker and expect that it will eventually take over the work of our Convair 580s down the road.”
One positive spinoff of the air tanker program is that the RJ85 is now certified by Transport Canada for flight in Canada.
Air Spray
Air Spray is developing its first BAe 146-200 air tanker in Chico, Calif., where it opened a U.S. subsidiary in October 2012.
“We’re very active converting the aircraft and we plan to fly in 2013,” said executive VP, Paul Lane.
“Once we’ve proven the concept with our prototype, we’ll look at contract opportunities in Canada and the U.S.” 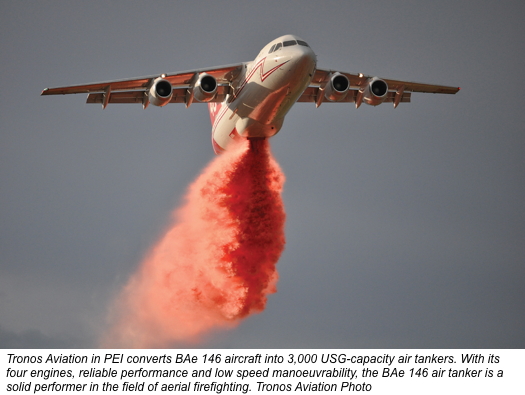 Tronos Aviation
Neptune Aviation has been operating two BAe 146-200 air tankers converted by Tronos Aviation in Prince Edward Island under an interim approval from the IAB.
The first BAe 146 entered service in October 2011 and the second in August 2012. A new tank design is being installed in the next two BAe 146s at Tronos, but Neptune didn’t win any additional contracts in the last round of bids.
Canadian Air Tanker Action
Canadian air tanker operators spent more time fighting fires in the U.S. in 2012, but their major fleet and crew decisions are dictated by contracts awarded back home.
Air Spray is the world’s largest operator of the Lockheed L-188 Electra, and in 2013 it has eight aircraft on contract for the first time, with the award of its first 92-day contract with the Government of the Northwest Territories.
Air Spray is also working closely with Lockheed Martin on an L-188 Electra limit of validity aging aircraft life extension program. The L-188 is not on the USFS’s contract list, but Air Spray’s Canadian-based Electras make frequent “splash and dash” attacks on fires in U.S. border states.
A third CL-215T flown by Conair pilots is now operating in Alberta, following turbine conversion. This is also the first year that three Conair Air Tractor 802Fs are flying in the Yukon, replacing three Firecats retired in 2012. The Air Tractors have uprated PT6A-67F engines and custom fire gates for better water flow from their retardant tanks.
Conair operates five Cessna Caravans as birddogs for Air Tractor tanker groups. The newest delivery in 2013 was a Caravan 208EX powered by a P&WC PT6A-140 “which offers a 25 per cent performance increase, which is a great match for our mission profiles,” concluded Conair’s Rick Pedersen.
News from the Web