Pita Aatami, president and CEO of Air Inuit, has always said the airline has never been afraid to innovate. In its 38 years of doing business, Air Inuit has had to reinvent itself a few times in order to stay profitable in the harsh operating environment of the Canadian North.

Over the years, Air Inuit—which is headquartered in Montreal and wholly owned by the Inuit of Northern Quebec under the Makivik Corporation—has found success by tailoring its operation to meet the needs of its northern customers. Now, according to Christian Busch, the company’s vice president of operations and chief operating officer, it’s time to innovate once again.

With cargo shipments accounting for a significant percentage of Air Inuit’s business, its one remaining Hawker Siddeley HS-748 is a valuable member of the fleet. It is the airline’s only turboprop aircraft equipped with a large 105×67-inch cargo door. That’s big enough to allow Air Inuit to transport oversized cargo, snowmobiles, mining equipment, or even generators for northern Nunavik communities. 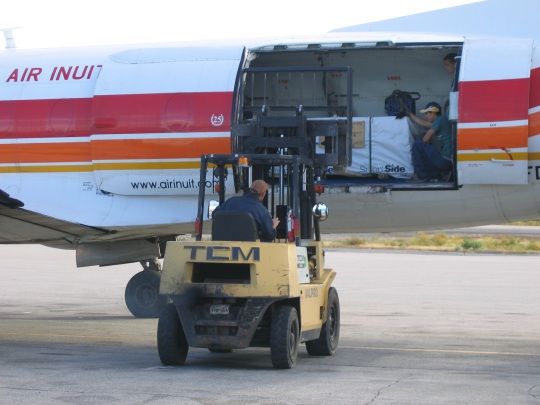 Air Inuit will soon be saying goodbye to its one remaining HS-748 aircraft, shown here. The airline has decided to add an oversized cargo door, similar to the one on the HS-748, to its Dash 8-300 freighter aircraft. Air Inuit Photo

“We needed a large freight door on a modern turboprop aircraft,” Busch told Skies. “Our entire strategic plan is to get out of the HS-748 and to standardize our fleet with more modern and efficient aircraft. To pursue the plan in a timely manner, we evaluated the feasibility of adding a large cargo door to our unique Dash-8-300 cargo aircraft. We also looked at other [turboprop] aircraft that were capable of cargo operations. ”

Busch is referring to two Dash 8-300s that Air Inuit converted to all-freight aircraft back in 2009, in response to the demand it was seeing for cargo services in the North. The two freighters are unique in the world; a custom solution that Busch said allowed Air Inuit to move toward a standardized fleet of Dash 8s, while at the same time serving the needs of its customers.

Those two Dash 8-300 modifications allowed Air Inuit to divest itself of all but one HS-748, which was reserved for overly large shipments that won’t fit in the Dash 8 freighters’ standard-sized cargo doors. Now, Busch said, it’s time to make those doors larger so the airline can say goodbye to its last HS-748.

“We reached out to Bombardier about 18 months ago,” he explained. “Air Inuit started the project by chatting with Bombardier to see if they were interested in joining forces, especially since aircraft data would be needed.”

After some discussion, the Dash 8 manufacturer came on board, agreeing to a commercial arrangement that will see it provide data and engineering support to B/E Aerospace Canada, the product development firm selected by Air Inuit. Bombardier has also agreed to promote the new cargo door solution to existing and future Dash 8-300 operators.

Udaya Silva is VP and general manager at B/E Aerospace in Winnipeg. He told Skies that his company will engineer and develop a prototype door on a Dash 8 fuselage barrel. After project completion, B/E Aerospace will own the rights to the supplemental type certificate (STC), and plans to offer interior cargo conversion kits as well as enlarged cargo door kits.

“Air Inuit has been the key driver for this project, investing heavily to develop a solution to meet their mission profile,” said Silva. “We will be the sole supplier of kits to any interested party for this solution beyond Air Inuit. Our STC will be in a format that allows for some flexibility and variation for future customers, to meet their specific mission operations.”

The new cargo door on Air Inuit’s Dash 8-300 freighters will be about the same size as that of the HS-748.

“The structure of the Dash 8 aircraft would allow us to do this size of door, and it works for us,” said Busch. “There are also multiple advantages from the operational side. The 748 is a low-wing aircraft with a low tail fin; but with the Dash 8, the high wing and elevated tail allow for safer and more efficient ground handling around the large cargo door.”

Compared to the HS-748, Air Inuit expects to save close to 30 per cent in fuel costs and realize a similar payload (about 12,500 pounds) with the large cargo door Dash 8-300 freighter. “We all know that operating in the North is very expensive, and we have to find internal efficiencies so we can limit any type of rate increases or surcharges,” said Busch.

By the spring of 2018, Air Inuit expects to have three Dash 8-300 aircraft modified and available to handle oversized cargo shipments. Air Inuit Image

Air Inuit isn’t pulling any aircraft offline for the project, either. It has purchased yet another Dash 8-300, and work is already underway to convert it to a freighter, with the addition of the oversized cargo door. Busch expects the new cargo plane to replace the HS-748 by mid-2017. After that, Air Inuit’s two existing Dash 8-300 freighters will be modified with the new doors. All three are expected to be online by the spring of 2018.

Busch said this is a uniquely Canadian project, involving a Canadian operator, a Canadian OEM, and a Canadian development partner.

“We strongly believe the Dash 8 is the aircraft to do what we need it to do,” he concluded. When you consider the risk, it’s a bold move for a company like ours. But, we’ve proven that bold moves have paid off in the past.”