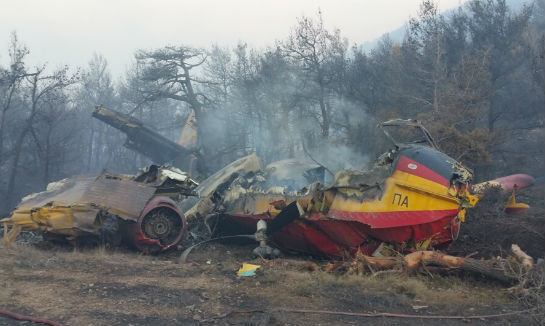 When a Hellenic Air Force Canadair CL-215 waterbomber crashed during firefighting operations on June 26, Erickson helicopter crews helped douse the post-crash flames. HAF Photo
When Erickson Aircrane pilots Mike Strasser and Jeff Shelton heard that one of the ducks had gone down, they immediately banked their helicopter over the Greek countryside and flew back to help.
They and another Aircrane, operated by Jeff Brenhaug and Don McLeod, were fighting a fire about eight miles northwest of Athens, Greece, on June 26, when a Hellenic Air Force Canadair CL-215 waterbomber—known as a “duck”—crashed on a wooded hillside. Thick black smoke was rising into the air as the two Aircranes arrived above the wreckage.
“It was pretty obvious that it had gone down and it was on fire,” Strasser told Skies. “We decided to switch to light coverage and began dropping water on the plane. As we came in behind the other Crane for our first drop, I was looking out the bubble window and I saw two people on the right side of the aircraft. It looked like one of them was dragging the other out.” 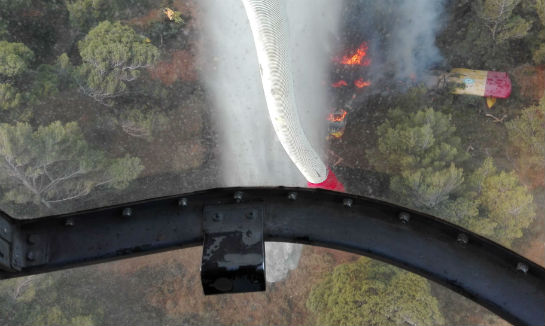 Both helicopters kept refilling with water and returning to the crashed waterbomber, dropping at least three loads each on the blaze. Mike Strasser Photo
“Just seeing somebody outside [the aircraft] was a good feeling,” said Strasser. “It crashed close to a road, and soon I saw firefighters on the ground rescuing them. We finished up there and headed back to fight the fire.”
But the story didn’t end there for the Aircrane crews. The next day they received a special visitor. Taxiarchis Papamarkos, one of the CL-215 pilots, sought them out to say his thanks.
“He told us the other guy had a back injury and couldn’t walk,” recounted Strasser. “He was trying to help him, but it was getting very hot and his flight suit was singed. He thought he would be dead in 10 seconds. He expected the plane to blow up, so he started counting backwards from 10. But when he got to four, he felt cool rain falling on him. It helped him to pull his friend out.” 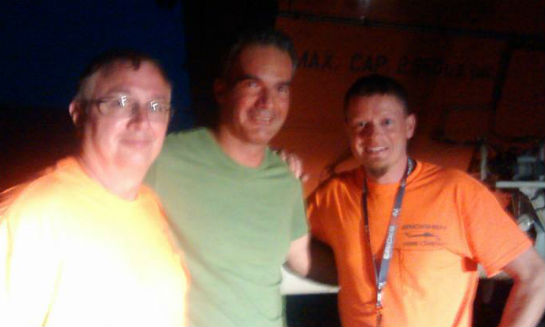 From left: Jeff Shelton, Taxiarchis Papamarkos, and Mike Strasser. Photo Courtesy of Mike Strasser
Strasser said they just did what any aerial firefighters would do and that Papamarkos is “the real hero in this story.”
The second CL-215 pilot is in hospital but is expected to recover.
The Hellenic Air Force is investigating the CL-215 crash, which is the third major accident involving its fleet of CL-215/415 aircraft since 2014.
News from the Web

Pilot safely removed from plane that crashed into power lines

From fighter pilot to robotics pioneer: An interview with Missy Cummings

U.S. sues to stop deal between American Airlines and JetBlue