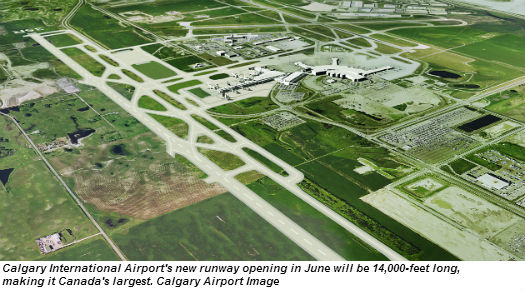 Celebrations haven’t been announced yet, but sometime in June of this year, champagne corks will be popping when when Alberta’s Calgary International Airport (CYYC) officially opens its new 14,000-foot runway, 17L/35R. Dubbed the Runway Development Project, its launch will wrap up the first phase of CYYC’s two-part Airport Development Program initiated in 2011; the other being the International Facilities Project, which is on target for an October 2015 unveiling.
The runway is touted as Canada’s longest, and with its parking apron and taxiways it will form part of the airport’s overall infrastructure. It will be CYYC’s fourth runway and was built on airport land between the existing air terminal building and 36th Street NE. The job was about more than just paving a runway; strength and stability construction layers extend beneath the surface to a depth greater than 114 centimetres (44 inches). Although CYYC could already accept the world’s largest aircraft (the Antonov 225 landed there in 2012), it has been announced that the Airbus A380 and Boeing B747- 800 can be accommodated on the new runway. Of course, it will be fully ILS-capable with Category III (a) ILS and centreline lighting—in fact more than 5,000 environmentally-friendly LED lights have been incorporated into the runway and taxiways.
Another environmentally sound feature of the $622 million runway infrastructure is a new central de-icing facility, which includes a special pond to collect de-icing fluid for recycling.
There have been challenges along the way, but the opening promises to be on time and on budget. “Weather was definitely a challenge in Calgary last year,” said Jody Moseley, director of corporate communications and marketing for the Calgary Airport Authority. “We had an exceptional amount of rain, especially in May and June; the entire city experienced that so it definitely created some challenges for our teams, but they adapted the project. It is a carefully coordinated and choreographed project, so they were able to adjust the schedule so they could continue working; there were different areas according to different weather conditions.”
Later in the year, early freezes presented a challenge. Asphalt shoulder paving had to be suspended in mid-November due to forecasted freezing conditions. That work is being completed this quarter, along with other remaining paving work associated with connections at Taxiway Foxtrot and the International Facilities Project apron. 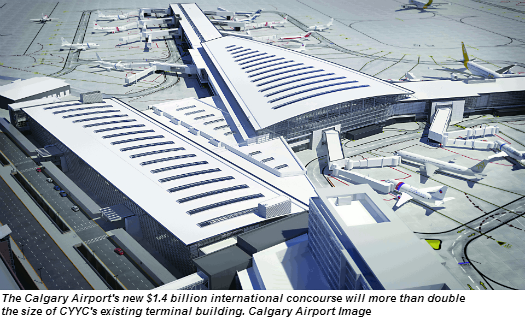 Meanwhile, across the tarmac, more than 1,000 workers are shaping that International Facilities Project and keeping the construction on schedule for its ribbon-cutting in October of next year.
The new $1.4 billion concourse will more than double the size of CYYC’s existing terminal building, adding 22 aircraft gates for international and U.S. bound flights. It features advanced sustainable elements such as the use of geothermal energy for heating and cooling— the required 588 wells are already complete. Heating is delivered via 600 kilometres of in-floor radiant heating tubing, under 32,800 square metres (353,056 square feet) of granite flooring. Rainwater will be harvested and stored in tanks totaling 500,000 litres in capacity, for flushing low-flow plumbing fixtures. “Our priority is to build a sustainable building,” explained Moseley. “We just want to ensure we minimize our overall footprint. And that is why we implement all the sustainable features into the building that we can. It keeps us growing in harmony with the environment.”
Another first for Canadian airports will be the new call-to-gate system, where passengers wait in a large comfortable lounge until their gate is announced. “It is something you see throughout the world, but not in Canada,” said Moseley. “It is just a really efficient way of running terminal operations, and it keeps us leading the country and keeping pace with international airports with similar systems.” And, travellers shouldn’t get bored with waiting: “There will be some great food and beverage, and some retail, services that will be unique to Calgary, too,” she added.
The Airport Development Program also includes a new Taxiway Romeo underpass to facilitate airport traffic along Calgary’s busy McCall Way, which services an important airport business area. It is on track to open in mid-July of this year.
Associated projects that fell under other jurisdictions were also needed as a result of the big airport expansion. These included the city’s Airport Trail Tunnel underpass, which is to open in May; a new 300-room hotel; and Nav Canada’s new control tower. The tower, Canada’s tallest freestanding air traffic control tower at over 90 metres (295 feet), became fully operational in May 2013.
What prompted the CYYC enlargement? One word: growth. The airport has more than doubled in size and passenger volume over the last 20 years. In 2012 it broke records, welcoming over 13.6 million passengers, and it is now Canada’s third-busiest airport. “The expansion is 100 per cent capacity driven,” said Moseley. “We’re one of the fastest-growing airports in the country, and it has become a challenge to manage all that passenger growth.”
This project, the largest CYYC has ever undertaken, should effectively handle airport growth for several decades to come.
Latest HeliTrader Listings