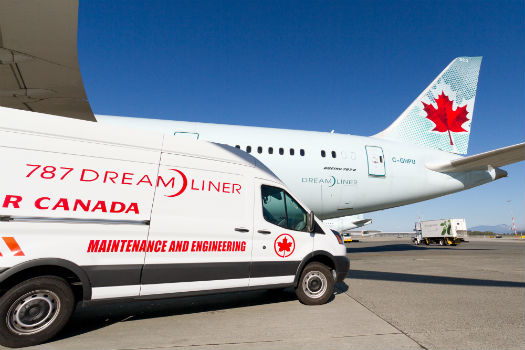 Air Canada maintenance and engineering’s Boeing 787 Dreamliner pit crew van is shown on the ramp at Vancouver International Airport. The van met an aircraft that arrived from Seoul. Fraser MacLean, Air Canada Photo
At 10:31 a.m. during a recent weekday, one of Air Canada’s Boeing 787-8 Dreamliners touched down at Vancouver International Airport from Tokyo’s Narita Airport.
At 11:33 a.m., another Dreamliner landed at the international terminal, known to travellers locally by its airport code, YVR. This flight originated in Shanghai.
It wouldn’t be too long before another 787-8 reached YVR, this time at 12:48 p.m., from Seoul.
In each instance, Air Canada deployed staff to methodically conduct maintenance checks on the wide-body planes. While other international carriers routinely assign two workers to carry out a series of maintenance tasks, Air Canada has opted for a “pit crew” concept for its Dreamliners, with five to eight employees descending on each arriving aircraft.
Having more employees on hand results in a speedier turnaround, which is good for passengers and boosts aircraft utilization, according to Alan Butterfield, the carrier’s vice president of maintenance and engineering.
“Utilization of your fleet is hugely important,” Butterfield said in an interview at YVR. While it takes time for passengers to exit and board planes, it’s busy behind the scenes, too. An array of airline staff, contractors and other workers handle everything from maintenance duties to refuelling to checking the flight deck.
Each Dreamliner pit crew consists of two licensed aircraft technicians, two licensed avionics engineers and a “trim and finish” mechanic, at a minimum. Another specialty worker often on hand is an in-flight entertainment technician, who troubleshoots the seat-back screens. 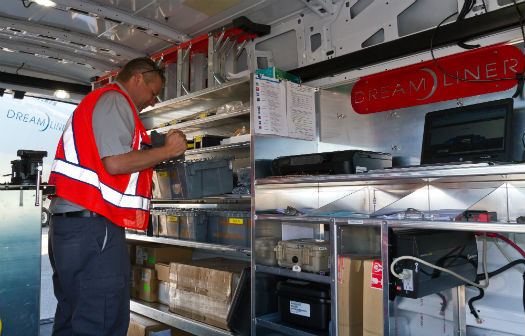 Pierre Plourde, an aircraft maintenance engineer at Air Canada, retrieves parts from the Boeing 787 pit crew van to certify the plane for departure. Fraser MacLean, Air Canada Photo
The end result is that Air Canada is able to turn around a Dreamliner in 80 minutes, compared with other carriers that might take two hours, Butterfield estimated.
Hours before a plane lands, information is being transmitted from the 787 to Air Canada’s maintenance crew via “advance health monitoring,” he noted.
Butterfield says it’s worthwhile to have more employees focus on the 787’s daily maintenance because there is a ripple effect if the plane isn’t ready in time. Potentially, it could mean that a Boeing 777, if one is available, might have to be assigned to take over a 787’s mission.
“The 777s are already flying 16.5 hours a day,” he said, emphasizing that there are challenges when bringing in a replacement plane if the 787 is delayed on the ground.
Butterfield is considering extending the 787 pit crew maintenance idea to Air Canada’s 777 fleet, possibly in 2016.
The Dreamliner made its debut at Air Canada in May 2014. The airline developed the pit crew concept earlier in 2015 and rolled it out in June.
At the time of writing, Air Canada had eight 251-seat Boeing 787-8s in its fleet and two of the longer-range 787-9s, which seat 298 passengers. Another 27 of the larger Dreamliners are scheduled to be delivered to Canada’s largest airline by 2019.
The 787-9 has a range of 15,372 kilometres, compared with the 787-8’s 14,500 kilometres.
From Vancouver, the carrier flies to and from Tokyo’s Narita Airport, Seoul, Shanghai and Beijing. From Toronto, the route map includes Tel Aviv, Copenhagen, Narita Airport, Munich, Milan and London Heathrow. Dubai and Delhi are scheduled to be added to the Toronto flight schedule in early November, serviced by 787-9s.
Scheduling flights requires much advancing planning because of the many tasks that need to be completed, not only by the pit crew but also others such as catering, refuelling and ground-handling staff, said Pierre Plourde, an aircraft maintenance engineer.
He drives around a white van that has been designated specifically for 787 maintenance and engineering needs, including items such as spare seat belts in case there is a problem with one on board. Another nearby truck carries a nitrogen tank in the back for aircraft tire-pressure duties.
Wearing a bright orange vest on the ramp, Plourde points to a worker whose job is to fill the plane with fuel. Refuelling alone can take 35 minutes. To make the flight from
Vancouver to Narita, the Dreamliner carries roughly 49.8 tonnes of jet fuel, which translates into 62,500 litres.
Brian Thomson, general manager of line maintenance for Western Canada, explained that co-ordination is crucial in making the pit crew process work smoothly at Vancouver International Airport and Toronto’s Pearson International Airport. Details range from verifying engine oil levels to reviewing log books in an array of required checks.
“The schedule is built for the 787 to fly 18.5 hours a day for eight days before an overnight visit for a 12-hour, in-depth maintenance layover. It is very important to be pro-active on the daily turnarounds, and we put 22 people on the layovers for the longer maintenance checks,” Thomson said.
It isn’t a simple matter of flying planes back and forth.
Each of the 787-8s that landed in Vancouver got sent to an overseas destination different from the one where the jet originated. The plane from Narita ended up being sent to Shanghai. The jet from Shanghai had Seoul for its next mission, and the aircraft from Seoul got assigned to fly to Narita in a carefully orchestrated flight schedule, said Michael Perucho, Air Canada’s manager of continuous improvement.
News from the Web