Oceania’s largest independent aerospace company has introduced a new model into its line of utility aircraft. Its latest offering is a high-wing, single-engine, five-seater that sits on tricycle gear. Capable of cruising at 170 knots and able to get off the ground in under 800 feet, its target market has long been dominated by the ubiquitous Cessna 206. While it may be new to some, this intriguing design is a significantly updated variant of a Canadian bush plane created over 71 years ago.

The Found FBA-1A first flew at Malton, Ont., on July 13, 1949. Found Brothers Aviation Ltd. decided that its 140 horsepower (HP) de Havilland Gipsy Major needed to be replaced with a more powerful engine. The slightly larger FBA-2A and its 250 HP Lycoming engine took flight on Aug. 11, 1960. The first production model FBA-2C flew on May 9, 1962, and received its Transport Canada (TC) and FAA type certificates on Feb. 19, 1964, and June 23, 1965, respectively. Twenty-six FBA-2Cs, as well as five 290 HP Found Centennial 100s were produced before the company succumbed to financial pressures in 1968.

Almost 30 years later, one of the company’s founders (N.K. “Bud” Found) established Found Aircraft Canada Inc. to produce the aircraft at Parry Sound, Ont. The new FBA-2C1 Bush Hawk featured a 300 HP Lycoming engine and first flew on Oct. 4, 1998. Certification was received from TC on March 5, 1999, and from the FAA on March 3, 2000. A total of 38 Bush Hawks and Bush Hawk-XPs were built.

On Feb. 20, 2007, Found Aircraft announced two enhanced models: the FBA-2C3 Expedition on tricycle gear and the FBA-2C4 Bigfoot taildragger. The Expedition first flew on Oct. 3, 2006, and received its type certificate from TC on July 25, 2008. The Bigfoot first flew on June 1, 2007, and was certified on June 5, 2012. Unfortunately, only 14 Expeditions and one Bigfoot were completed before the company went out of business in 2014. By then, a total of 86 Found aircraft had been produced over 65 years. Despite glowing reviews from commercial charter and private operators across North America, it seemed that the future of Found was lost.

Sometimes attractive situations are more easily recognized from a distance — even if it is 8,650 statute miles. Pacific Aerospace Limited (PAL) of Hamilton, New Zealand, and its predecessor companies have been producing specialized utility aircraft since 1954. In 2016, PAL began negotiations to acquire the production rights of the FBA-2C3 Expedition. The type certificate was eventually transferred from Found Aircraft on Nov. 23, 2017, and the required M1 manufacturing certificate was subsequently granted by the Civil Aviation Authority of New Zealand.

The initial Pacific Aerospace FBA-2C3 E-350 Expedition (serial number 314) first flew as ZK-EXP at Hamilton on Dec. 12, 2019. It departed New Zealand aboard a ship in August and headed for Northwest Backcountry Aircraft in Caldwell, Idaho. That outfit had been a dealer for Found Aircraft and is now the Expedition’s exclusive North American agent.

The light utility aircraft market can be generally characterized by types that feature a single engine, six seats and have a maximum take-off weight of less than 4,000 pounds/1,800 kilograms. Primarily purchased by independent commercial operators, corporations and individuals, they have also found work with government entities performing duties related to wildlife surveys, police surveillance and military logistics.

Textron Aviation’s Cessna Aircraft unit has commanded that market, since its model 206 was introduced in 1962. While there are currently more than 300 members of the Cessna 206 family on the Canadian Civil Aircraft Register, only 25 Founds can be spotted. 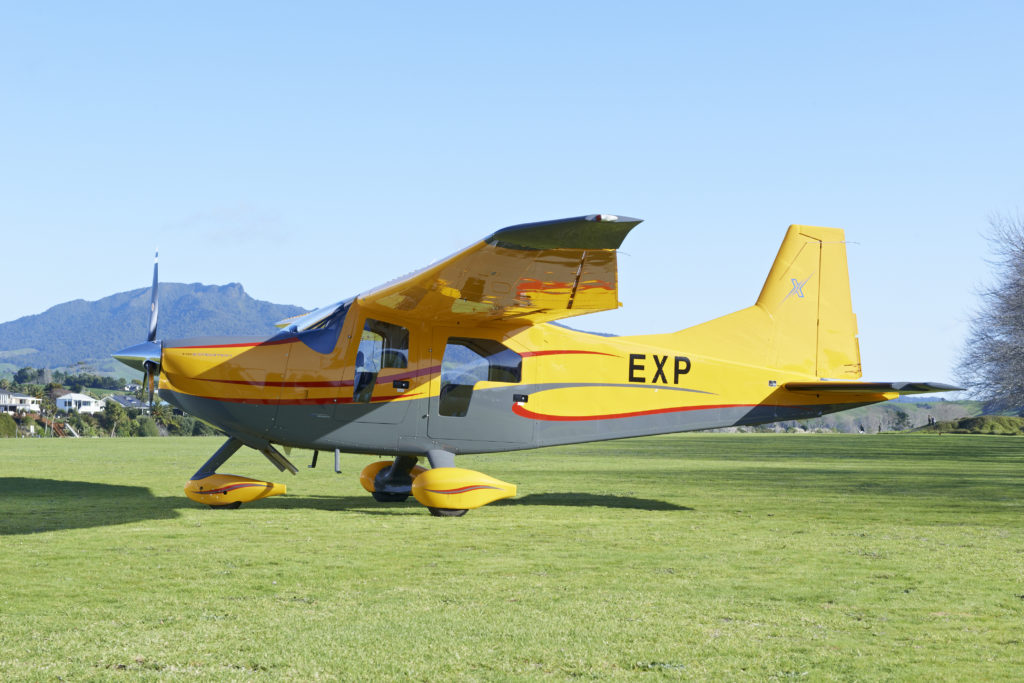 Since the last Expedition was completed at Parry Sound in 2013, approximately 240 Cessna T206Hs have been built. With the resurrection of the Expedition, Pacific Aerospace is looking to capture a share of that niche.

Like its ancestors that primarily flew charters in support of natural resource exploration and tourism, the new E-350 Expedition has design features intended for those missions. These include:

The Expedition is being offered with either a 315 HP normally aspirated Lycoming or with a 300 HP turbocharged variant of that engine. A summary of the dimensions and key performance specifications of the FBA-2C3, the FBA-2C3T (turbo) and the Cessna T206H Turbo Stationair HD are provided in the accompanying table. 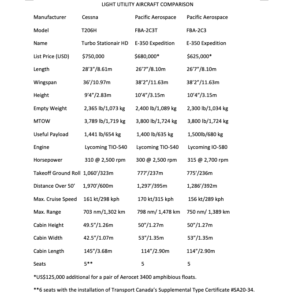 A review of those numbers reveals that the three aircraft have somewhat similar useful loads, maximum ranges and maximum cruise speeds. A direct comparison between the turbocharged Expedition and the T206H shows that the former slightly edges out the Cessna product when it comes to cruise speed and range. Where both Expeditions really excel is their short field performance. With wings that feature tip extensions, vortex generators and large Fowler flaps, they have impressive short take-off and landing (STOL) capabilities. With similar maximum take-off weights to that of the T206H, both Expeditions can be off the ground in 27 per cent less distance and over a 50-foot tall obstacle in a 34 per cent shorter distance.

In an effort to gain insights into what the most appealing features of the aircraft are, regardless of the vintage being flown, Skies approached individuals who are intimately familiar with members of the Found family.

Kasey Lindsay, co-owner of Northwest Backcountry Aircraft, cited the E-350’s solid construction (“a steel tube frame”), high cruise speed, stability during flight (“no adverse yaw in turbulence”), proven dispatch reliability, ease of entry and egress thanks to its four large doors and its good looks. He noted that it has “ramp presence” and attracts attention along any flight line.

Dave Olesen, the owner of Hoarfrost River Huskies Ltd., operates a Bush Hawk-XP from its base located 210 statute miles/337 kilometres northeast of Yellowknife, N.W.T. The aircraft’s primary missions are related to wildlife surveys and camp support. His example is a taildragger, but it also wears floats and skis. When asked what key features of the aircraft make it ideal for bush flying, Olesen told Skies, “The large four doors all around the plane. Very awkward pieces of cargo, such as a small chest freezer or a full fuel drum, are easily loaded and offloaded from either side. The windows are a favourite with wildlife spotting and survey crews.” When asked if there were any issues regarding the availability of parts, he noted, “No, not since PAL took over.”

Bamaji Air Inc. of Sioux Lookout, Ont., took delivery of its Bush Hawk-XP in July 2004. Lars Ohman, Bamaji’s general manager, told Skies that it has flown over 10,000 hours since then in support of indigenous reserves and outpost camps. That’s an average annual utilization of more than 625 hours. When asked how best to describe it, he said, “It’s a tough little plane that stands up well.”

The Expedition has also found a home in a corporate fleet as well. The Houston, Texas-based subsidiary of a major Canadian energy company uses it to perform pipeline patrols. A review of their activity on a popular flight tracking website revealed one mission that covered 725 nautical miles in six hours.

Mark Crouch, Pacific Aerospace’s CEO, told Skies that PAL has the ability to produce one E-350 per month alongside its larger P-750 and Cresco utility models. With an order backlog of four units, PAL is hoping to see the order book fill as the demonstrator airplane makes itself known in North America. Given the relatively small number of Founds in service (see the accompanying production history table), brand awareness for the E-350 Expedition has potential to improve. 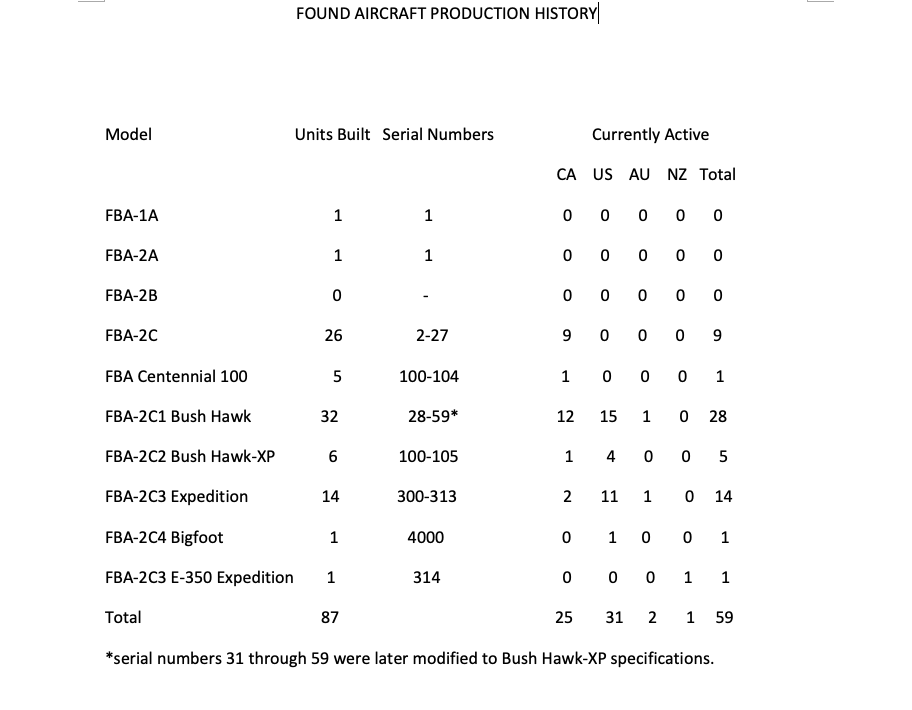 When Skies asked Mark Crouch how well his new model might sell around the world, he said, “The E-350 is an exceptionally versatile aircraft, equally at home on the tarmac as on the dirt strip. We very much see this aircraft as a flying 4WD truck that will appeal in virtually any remote location on the planet.”

Kasey Lindsay of Northwest Backcountry Aircraft looks for Expedition sales to gather momentum and reach 10 to 12 units per year five years from now. Regarding PAL’s involvement, he noted, “When Mark took over as CEO, that is when the tide changed.”

With its production now in the hands of a seasoned manufacturer and a marketing campaign on the horizon, this time-tested airplane that has received accolades from its operators appears to be well positioned to experience a prosperous future.

News from the Web

Will travellers be able to trust flying on Boeing 737 MAX?

Gander wants to put pressure on governments regarding airport troubles