Student pilot Jessalyn Teed, left, with flight instructor Ektaa Pathria on the ramp at Waterloo Wellington Flight Centre in Breslau, Ont. The flight school is hosting Girls CAN Fly! on Saturday, March 5. Girls are invited to come to the airport for free flights, as well as the chance to meet females from all sectors of the aviation industry. Ben Forrest Photo

Ektaa Pathria remembers seeing her father, Harish, launch himself out of airplanes for the first time when she was around four years old.

Harish was a paratrooper with the Indian Army, and Pathria would see him on practice missions, falling out of the sky with a parachute to slow his descent.

“I never really felt like, ‘Oh, I want to do skydiving’ or anything like that,” said Pathria, now 26 and a flight instructor at the Waterloo Wellington Flight Centre in Ontario. “But I always felt that flying that airplane that people are jumping out of, that would be pretty cool.”

The experience of watching her father in action, along with an enjoyable first flight in an Antonov AN-32 military plane, helped spur Pathria toward a career in aviation. Her family moved to Canada when she was 11 and she became an air cadet soon after, a hobby that stoked her ambition to fly. She went on to specialize in commercial aviation management at the University of Western Ontario and started working as a flight instructor in 2012.

“Being in the air, that’s where your office is,” she said. “It’s your workplace, and every time you’re up there, you’ve got a beautiful view. You have this freedom that you probably won’t feel in a car or anything like that—flying in three dimensions, really, and moving around and being able to go anywhere.”

Pathria’s career in aviation may seem predictable in hindsight, but it’s relatively unique. According to the Brampton Flight Centre in Ontario, only six per cent of all private pilots in Canada are women, and women make up only 4.5 per cent of airline transport pilot licence holders.

Numbers in the United States are similar, where only 5.39 per cent of pilots are women, according to statistics compiled by Women of Aviation Worldwide Week, an event that raises awareness of aviation opportunities for girls and celebrates women’s accomplishments in aviation.

Out of the more than 76,000 people reporting an income source as a pilot or engineer, only around 3,200 are women, the organization says.

Those kinds of statistics have inspired a series of events aimed at encouraging girls and women to consider careers in aviation, or to take up flying recreationally. Women of Aviation Worldwide Week runs March 7 to 13 this year and features flying events, open-door events at factories and schools, and museum programs.

In Canada, more than 15,000 people are expected at Abbotsford International Airport in B.C. for The Sky’s No Limit—Girls Fly Too!, an event that offers free flights to female first-time fliers and aims to pique their interest with hands-on ground activities on March 12 and 13.

A similar event is Girls CAN Fly! at the Waterloo Wellington Flight Centre, being held on March 5 in honour of International Women’s Day.

Girls CAN Fly! also offers free flights, plus the chance to interact with female flight crew from Porter Airlines and representatives from the Canadian Armed Forces, Royal Canadian Air Cadets and Great Lakes Helicopters, among others.

“We want them to know that if they’re interested in this and flying and being a mechanic and doing any of those things, they can do it,” said Jennifer Vandermolen, organizer of Girls CAN Fly!

“Once upon a time girls didn’t think about being doctors and lawyers, and now lots of doctors and lawyers are female,” added Robert Connors, general manager of the flight centre. “Engineers—the same thing, and we’re trying to reposition piloting and careers in aviation in the same kind of gender-balancing way.” 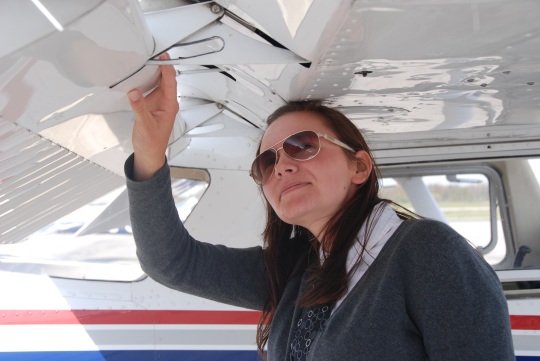 Only six per cent of all private pilots in Canada are women, and just 4.5 per cent of airline transport pilot licence holders are female. WWFC Photo

It’s hoped the free flights will help inspire girls to become pilots, just as a similar experience hooked Jessalyn Teed, a student at the flight centre.

Teed, 20, went up in a four-seater Cessna 172 at a Canadian Owners and Pilots Association (COPA) Young Eagles event when she was eight years old.

“From then on, I had always said that I wanted to be a pilot,” she explained. After looking into education opportunities, she settled on a joint program in geography and aviation with the University of Waterloo and Conestoga College.

“I think the whole industry and my class specifically being very male-dominated, it can first be seen as something that’s intimidating,” said Teed. “But I try and approach it with the mindset that, instead of seeing it as an obstacle, seeing it as an opportunity. It really highlights the women that are here, and it helps me to build a community with the women that are here.”

Teed cited the perception that aviation is male-dominated as a barrier to women, adding it’s been hard for women to break down that trend.

Others have pointed to a training system that favours young, mechanically-inclined males or the perception it’s difficult to have a family while also working as a pilot.

“I think that has a lot to do with how women kind of lag behind in aviation, because of the family aspect,” said Pathria. “I mean, there are a lot of women who have gotten over that or who found supporting spouses and kids and a way of dealing with all that. But many women who are trying to enter the industry kind of stop right there.”

Exposure to aviation is another barrier Pathria sees to young women entering the industry.

“Usually boys might get the exposure just from the movies they watch or the toys they play with or anything like that, or just living close to an airport,” she said. “A girl might not get that from the things that she’s exposed to.”

Her message to young girls is simple.

“I feel that if there’s anything in a young girl’s mind that tells them they are at all interested in something like flying, they should definitely give it a chance,” she said. “Try it out and do not be intimidated by knowing that it is a male-dominated industry. That makes no difference at all. It is very much possible to pursue it if you’re willing to work hard.

“If you realize that you have a passion for flying and your passion exceeds the obstacles that you face, then there’s nothing stopping you from achieving what you want to achieve.”

For more information on the Girls CAN Fly! event at the Waterloo Wellington Flight Centre on March 5, visit http://www.wwfc.ca/event/girls-can-fly/.