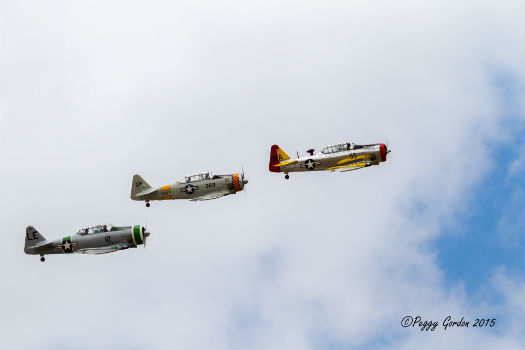 A Texan formation flight takes place over Great Falls, Mont.
The weekend of July 17 to 20 saw much excitement in Great Falls, Mont. Warbirds were arriving, and an airshow had been organized by John Faulkner, director of the Great Falls International Airport. This was in honour of the Bravo369 Flight Foundation’s planned re-creation of the secret Alaska-Siberia Air Route (ALSIB) from Great Falls, Mont., to Krasnoyarsk, Russia.
Warbirds were a familiar sight in Great Falls during the Second World War, after the signing of the Lend-Lease Act of 1941. Under this Act, passed prior to the United States entering the war, nearly 8,000 aircraft and other pieces of military equipment were supplied to the Soviet Union.
The most prevalent aircraft making the journey to Russia was the Bell P-39 Airacobra fighter, as well as its improved version, the Bell P-63 Kingcobra. The P-63 became vital to the Soviet defence and was principally used as a tank buster, equipped with a 37-millimetre cannon and two machine guns. Some other aircraft provided to Russia included the North American B-25 Mitchell bomber, the Douglas C-47 Skytrain (adapted from the commercial DC-3 airliner), and the North American AT-6 Texan.
The warbirds were ferried to Great Falls from point of manufacture, piloted largely by WASPs—a.k.a. Women Air Force Service Pilots. From the staging area at Great Falls, the 7th Ferrying Group was tasked with establishing a secret route to ferry supplies through Canada, via Edmonton, Alta., to Ladd Air Force Base in Fairbanks, Alaska, where the Russians took over transport to Krasnoyarsk and then to the battlefront. 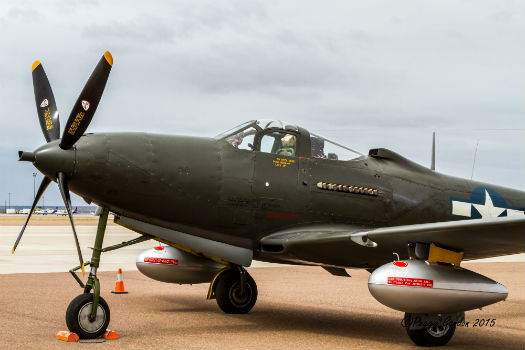 The Bell P-63 Kingcobra was vital to the Soviet defence and was principally used as a tank buster.
Now, travel forward 70 years post-war. Jeff Geer, founder and president of Bravo369 Flight Foundation, has spent eight years researching and organizing a re-creation of this gram. Hence, in July 2015, the warbirds returned to Great Falls.
Geer arrived there with three AT-6 Texans from near Bellingham, Wash., piloted by himself, Alan Anders, and Mark Kandianis, to meet up with Russian pilots in two C-47s.  On display near the airport’s two wooden hangars was a P-63 Kingcobra owned by John Bagley of the Legacy Flight Museum in Idaho—one of only two flying in the world today. It was flown in by Todd Therp, pilot and mechanic. There was also a Hercules C-130 on display.
One C-47 arrived, flown by a Russian crew consisting of Valentin Lavzentyev, John Makinson, and Glenn Moss. Co-incidentally, there was also a P-51 Mustang on hand, piloted by Gene Mallette from Helena, Mont., with “Sweet Mary Lou” painted on the side.
The locals were there by the hundreds, along with veterans who were eager to tell their wartime stories. Bravo’s filmmaker, Dave Lowrance, was interested in their tales, as he is making a documentary about the experience. One man, Pat Buckley, remembers that, early in this process, the pilots were not allowed to fly the warbirds over the Canadian border, so they were towed across near Sweet Grass, Mont., to Alberta, before carrying on with the flight. 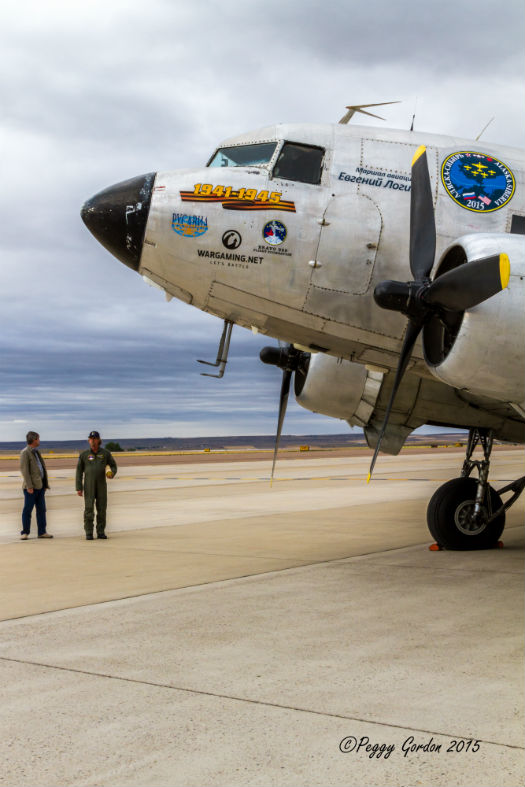 A Douglas C-47 Skytrain was present, flown by a Russian crew consisting of Valentin Lavzentyev, John Makinson, and Glenn Moss.
On July 18, 2015, an outdoor stage presentation with an impressive array of speakers included Russian dignitaries Sergey Kislyak, the Russian Ambassador from D.C., and Andrey Yushmanov, the Russian Consul General from Seattle.  This project required a Russian partner which was Rusavia, a Russian aircraft parts supplier, represented by Sergey N. Baranov, general director, and his advisor, Alexey Krivalov. A major sponsor for this project was Wargaming, a worldwide video game producer, represented by Tracy Spaight, special project manager.
Other presentations included the WASPs and a seven-minute documentary about the ALSIB route. Journalists from Great Falls and from Minsk, Belarus, covered the event. KRTV was there and Central Mountain Radio Network of Great Falls interviewed Craig Lang, a director of Bravo369.
July 20 was clear and sunny. The aircraft launched, with Jeff Geer and Craig Lang in a Texan, a Navion support plane (to help with luggage and logistics), and one C-47.  Their first stop was Edmonton International to clear Customs, and then Villeneuve Airport for the night, as the Municipal airport is now closed.
Stormy weather kept the travellers in Villeneuve for a couple of days before they could carry on to Dawson Creek and Whitehorse, Yukon. Modern pilots have access to current weather and high tech navigation aids, unlike the pioneering pilots of the Second World War.
In Fairbanks, at the ALSIB Memorial, Bravo369 officially turned the flight over to Rusavia, who reached Krasnoyarsk on Aug. 4.
Geer and Lang later flew to Moscow to attend completion ceremonies on Aug. 25, putting a special finale to a special project.
News from the Web

CAPA looks out for those employed in airline industry

Warbirds over Roanoke set for May 15