According to IATA, between 2012 and 2016 one in six accidents worldwide followed an unstable approach. This is without a doubt the greatest threat to aviation safety today. In 2020, no other decision can have a more positive impact on the number of accidents than the decision to go-around. In decreasing order, the risks of continuing an unstable approach are one — hard landing and excessive wear of aircraft components, two — runway excursion leading up to total loss of hull and, three — ground impact before runway threshold.

The concept of a stable approach refers to obtaining a constant descent angle, a constant indicated airspeed, a constant rate of descent, and a correct aircraft configuration. Combined, these criteria lead to the touchdown zone where the landing manoeuvre can begin. Each year around the world, 976 000 instrument approaches are unstable and 945 000 are followed by a landing.

An unstable approach is described as an aircraft state or a configuration that exceeds pre-established criteria of a stable approach. More precisely, the deviances are Vref exceedances, improper use of engine power, approach slope deviations and numerous aircraft configuration mistakes with regard to  landing gear, flaps and spoiler selection.

Whether the unstable approach is intentional or not, the Standard Operating Procedures (SOPs) of all operators call for an immediate go around at prescribed gates. Unfortunately, 2. This scarcity suggests the go-around manoeuvres should be counted as the fourth operational risk based on the number of errors and SOP deviations observed, and that it could have been avoided by flying a stable approach. “Pilots often consider the go-around as a greater risk than continuing an unstable approach to land.” The go-around also disturbs the terminal area traffic flow.

In the great majority of unstable approaches, kinetic energy is excessive (high and fast). Exceptionally, they lead to a stall before or at the runway threshold. In all cases, we note the absence of reactive and decisional involvement of the pilot monitoring (PM). Only recently the industry was able to document the preponderance of unstable approach predictors at 500′ AGL. In decreasing order of occurrence, the predictors are:

Engine power at idle is therefore the most reliable predictor that an unstable approach is in progress or about to degrade. In oral interviews, by proposing to airline pilots that at 500 ‘AGL, engine power is idling, only 43 per cent respond that a go-around is necessary. When lowering the altitude to 200 ‘AGL and asking the question again, only 63 per cent of pilots think of going around. This non-compliance to SOPs  indicates a lack of knowledge of the very existence of the correlation of Idle Power — Unstable Approach. We can easily extrapolate this lack to the remaining seven predictors listed above.

The non-compliance is also explained by the variability and complexity of published unstable approach procedures. Some operators still use long and ambiguous procedures that are too frequently modified. Several industry stakeholders request that the procedures be in line with the pilots’ airmanship, simple and straight forward, with the introduction of such concepts as the optimal touch-down zone (TDZ) and lateral TDZ limits, since the outcome of unstable approaches is truly an unstable transition above the runway.

Fix the problem at the training stage

The human brain compares each situation that arises with a catalog of situations learned in the past. During a non-stabilized approach, decision-making to go around is expected to be a fast and personal bias-free process. The speed at which the brain processes the situation is dependent on the imprint that learning has left in the pilot’s memory. Individuals remember frequent examples better than they do infrequent events.

Repetition is essential not only for pilots to master the technical elements of a manoeuvre, but to feel the satisfaction mastery provides. It is precisely this satisfaction that allows the brain to save the experience in a pleasant, safe and clear register, as opposed to threatening, risky and obscure. Based on the human factors of science of availability, repeated and pleasant facilitation of the eight predictors of unstable approaches during post-flight briefings is the best method to guarantee optimum decision-making reactivity among pilots. The energy invested in human factors of availability offers the best return on investment.

1) Practice, Repeat. Like stalls and the recovery of unusual attitudes, unstabilized approaches must be subtly introduced by the instructor during training flights. Among the best practices, we note the use of non-standard simulated ATC vectors precipitating pilots towards the approach in order to disturb enough variables to observe and quantify the presence of predictive factors.

The eight unstable approach predictors must be methodically reviewed during each debriefing, the instructor having noted the precise moments of SOP deviation occurrences, and the moments where proper mitigation strategies avoided them. The instructor must remain alert to the lack of awareness of the pilot monitoring (PM), allowing the deviance to develop. The debriefing is not insignificant, as reported by the aviation psychologist Sammy Szpic: “It is important to review not only how to proficiently execute a go-around, but most importantly why it was not executed. The debriefing must allow the instructor to highlight the reasons for this difficulty in order to correct it.”

2) Note, Fail, Repeat. The chief pilot must encourage the instructors to detect and note the SOP deviations during the training sessions, well before the pilot proficiency check (PPC) event. This obviously includes the lack of feedback from a PM and the use of non-standard calls, two deviant behaviours historically greatly ignored. When one or more predictors of non-stabilized approach are observed by the instructor, the crew performance must be graded as failed and be subject to remedial training prior to the PPC. 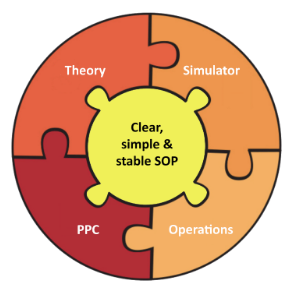 One culture one standard

The pilot decision making process during the approach must be based on SOPs that are impeccably clear, consistent and devoid of local culture that might widen the gap between ground school, simulator training, flight testing and line flight. Flight instructors must pay close attention to the presence of instability predictors during the lessons and systematically make it the focus of debriefings, including any lack of feedback from the PM. By starting at the root, the industry’s unstable approach problem has a better chance of being resolved.

Jean LaRoche has been teaching the Canadian Aeronautics Act, Regulation and Human Factors to pilots for 30 years. He is a Fellow of the Royal Aeronautical Society for his work in Human Factors and the AQTA 2019 Fecteau Award. He also coauthored the WOMBAT psychological test.