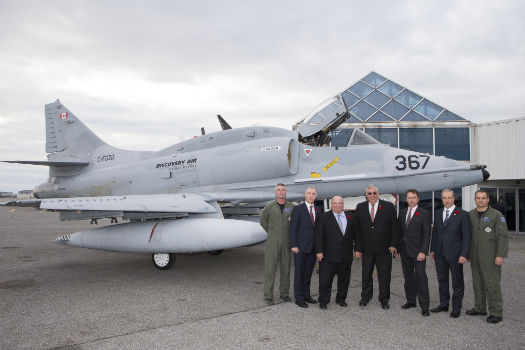 The first of seven single-seat Douglas A-4N Skyhawks upgraded by Discovery Air
Defence Services stopped in Ottawa en route to Germany, where the Luftwaffe will
use the aircraft as a “low-cost” aggressor trainer. DADS Photo
Jacob “Koby” Shavit, chief executive officer of Discovery Air Inc. (Discovery), showed off a Douglas A-4 Skyhawk on the Shell Aerocentre ramp at Ottawa International Airport (CYOW) on Oct. 29. Flown in a couple of days earlier by Shawn “Burner” Byrne, a former Royal Canadian Air Force CF-18 Hornet pilot, the “N” model aircraft will be used by the German Luftwaffe for aggressor training.
Shavit, a former Israeli Air Force (IAF) McDonnell Douglas F-4 Phantom and A-4N pilot, explained the A-4N’s characteristics to Skies. One notable design element is a high nose gear, which enabled a Cold War-era Skyhawk to centre-line a nuclear weapon on its compact airframe: 40’3” long with a 26’6” wingspan, a 15’ tailfin and a maximum takeoff weight of 24,500 pounds.
Having acquired an initial seven A-4Ns from Israel, which previously had 117 and used to them to good effect in the 1967 Yom Kippur War against Syrian and Egyptian attackers, Discovery Air Defence Services Inc. (DADS), a wholly-owned subsidiary of Discovery Air, completed extensive upgrades at its plant in Mesa, Ariz. DADS, formerly known as “Top Aces,” was founded by three former CF-18 pilots in 2005, and was subsequently acquired by Toronto-based Discovery Air.
A couple of days after the show-and-tell at CYOW, Byrne and Brad “Bear” Dolan, another ex-Hornet driver, left on a polar delivery trip to Wittmundhafen Air Base, where the “Richthofen” Tactical Group will use the aircraft to hone the skills of their Eurofighter Typhoon crews. The Skyhawks will retain their C-registry and will proudly display “Discovery Air” on their fuselages and the Canadian flag on their vertical stabilizers.
DADS president and Top Aces founder, Paul Bouchard, told Skies in an exclusive interview that the concept of outsourcing aggressor training was driven by NATO-wide budget cuts in the 1990s. “There was a need for an affordable sub-sonic aircraft that can do most roles in support of military operational training,” he said.
In addition to its A-4Ns, Discovery has more than 160 fixed- and rotary-winged aircraft in its fleet, operating in 25 communities in Canada and as far afield as Patagonia, Chile. Discovery provides not only the DADS training, but also air ambulance, fire suppression and charter services, as well as a range of logistics, maintenance, repair, overhaul, modification, engineering and certification services. 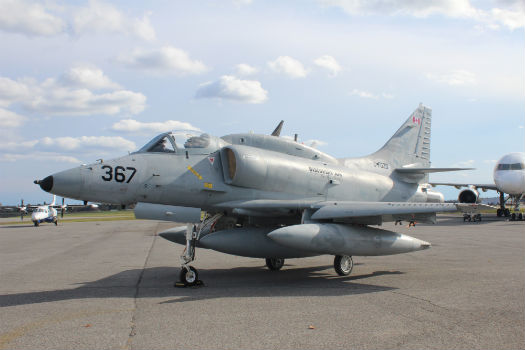 Discovery Air Defence Services completed extensive upgrades to the A-4N aircraft
at its facility in Mesa, Ariz. DADS Photo
Bouchard said the company acquires aircraft either directly from governments or—in the case of its Skyhawks and former Luftwaffe Dassault/Dornier Alpha Jets—from other companies which bought them from governments. “We really do our own assessment of whether it’s supportable, and whether it is going to have an adequate life to support the annual flying rates for the number of years we expect to operate it,” he explained.
When a civil operator acquires an ex-military jet, type certification is understandably complicated,due to elements such as ejection seats and external stores points. Therefore, Transport Canada and the Department of National Defence have what Shavit calls “a marvelous collaboration on a framework for the civilian operation of military aircraft [which] has become the gold standard which our allies try to replicate.”
Shavit, a Columbia and Harvard graduate with business and law degrees, retired in 1992 from the IAF after 20 years, and still flies a 2006 glass-cockpit Piper Saratoga HP for pleasure. He pointed out that the German program “will establish Discovery Air in the centre of Europe’s largest economy, providing a foundation for future expansion with other NATO partner countries.”
Bouchard said DADS tears down the aircraft to depot-level inspection standards, sending the Pratt & Whitney engines out for overhaul. Everything else is done in-house, including the installation of new military or civil avionics. Garmins are used in the new Skyhawks, but some “steam gauges” have been retained where suitable. The aircraft also have traffic collision avoidance systems and the ability to drop practice munitions.
“We can do it end to end: bring it in, tear it down to the most basic level, build it back up, modify it with in-house engineering and certify—which sets us apart from most companies which are similar to us,” said Bouchard. He explained that similar projects on a government contract with a major original equipment manufacturer probably would involve “a few years and many more people.”
The next platform on the DADS hit-list is a “well-advanced” acquisition of U.S. Air Force F-16 Fighting Falcons, as the company targets the U.S. military “and a number of other NATO countries” operating the latest strike fighters. “It’s a question of what aircraft is best suited to the customer’s training,” said Bouchard. “Modernized fourth generation F-16s or even F-18s are the appropriate platforms for F-35 and F-22 training. They need a capable threat to fly against.
Once western air forces truly go into the fifth generation training environment,… all the benefits are magnified in terms of operating costs and the hours available on those types of platforms.”
Canada was one of the first NATO countries to pursue the contracted approach, which is now being copied by other countries wrestling with increasingly tight defence budgets. “It makes absolutely no sense to fly an F-18 […] against another F-18 at a cost of $40,000 an hour each—as the Canadian government used to do and as many other countries still do,” said Shavit, adding that the program has saved Canadian taxpayers “hundreds of millions of dollars.”
Latest HeliTrader Listings