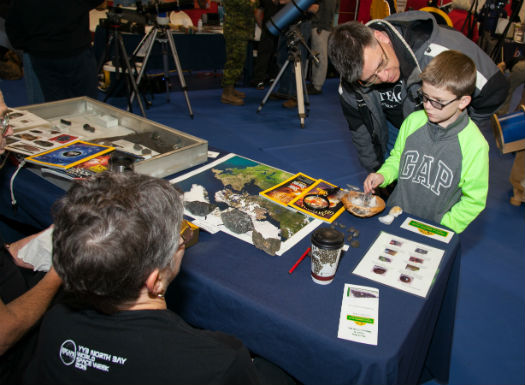 Brooklin, Ont.-based science teacher and North Bay native John Whitman and his son Alden discuss meteorites with members of the Nipissing Rock and Mineral Club.
World Space Week was embraced by a number of organizations in North Bay, Ont., with the first-ever celebration of the occasion in the city. A number of organizations, agencies and groups joined the City of North Bay, partnered with Canadore College and 22 Wing/CFB North Bay, to present the largest event in Canada.
Officially titled YYB North Bay World Space Week 2015, the celebrations ran from Thursday Oct. 8 to Saturday Oct. 10. Industry Day was hosted Thursday at Canadore College’s Aviation Campus and attracted 60 business leaders.
Education Day on Friday was attended by over 1,000 Grade 6,7,8 and 9 students from schools in the Nipissing area. Community Day on Saturday was open to the public for free and saw a steady stream of visitors, young and old, throughout the day. The last two days of the event went a long way to encourage space and aerospace interest and interaction with children and students, the main goal of Space Week.
The World Space Week theme is “Discovery,” and focuses largely on space exploration. Displays were centered in the 22 Wing Fitness and Wellness Centre’s gymnasium at 22 Wing / CFB North Bay, and presentations took place in the adjoining theatre.
Two large portable inflatable planetariums were provided by Science North and the Royal Ontario Museum, and manned by Canadian Ecology Centre staff. An interesting presentation by Prof. Jaymie Mark Matthews, astrophysicist from the University of British Colombia, covered stars and planets visible from earth, and discussed how many may be habitable or capable of sustaining life. Recent strides in space detection systems have brought new totals of 1,969 planets and 4,175 candidate solar systems visible to us.
Numerous displays, many interactive, included: Nipissing Rock and Mineral Club demonstrating various types of meteorites, and the North Bay Astronomy Club, displaying many different telescopes, both indoors and outdoors. 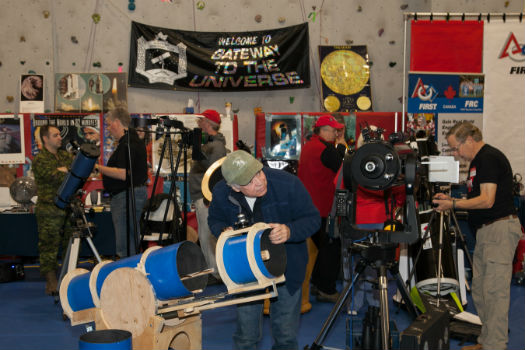 22 Wing, based at CFB North Bay, displayed a model of Canada’s Sapphire Satellite which tracks satellites, as well as space junk. The unit was launched in 2013 and is instrumental to the NORAD unit’s mission. Tours of the Canadian Forces Museum of Aerospace Defence was a highlight for many with extensive displays of equipment used at North Bay to fulfill its NORAD role.
Author Robert Godwin, publisher, editor and CEO of Apogee Books / CG Publishing and Space Curator at Canadian Air & Space Museum, delivered an overview presentation of Canadian space and aerospace development over the past century during Industry Day.  He also manned a table selling his books on the other days.
Godwin was also touting a major historical find, an essay written by a Scottish Canadian Presbyterian minister and later Queen’s University professor named William Leitch, entitled “The First Scientific Concept of Rockets for Space Travel” which he wrote in 1861.  The essay was included anonymously in a science book called “A Journey Through Space,” and in Leitch’s 1862 book “God’s Glory in the Heavens.”
Godwin proved that Leitch used scientific principles to accurately describe the rocket as the best device for travelling in space in 1861, possibly the first such reference anywhere, which predated most commonly known similar theories put forth in the late 19th or early 20th centuries.
Industry Day
Regional aerospace and space capacities were the focus at Industry Day on Thursday. Over 60 business and community leaders discussed inter-organizational scope and partnership potential for the future at North Bay. Local aerospace stakeholders made presentations including Innovation Initiatives North, Motion Industries Canada, North Bay Machining Centre Inc., Ontario Northland Transportation Commission (ONTC) and the Offset Market Exchange (OMX).
Industry tours of the Jack Garland North Bay Airport visited businesses located airside at the airport, or in its adjacent rapidly growing industrial park. These tours focused on the airport’s flexibility and resources available in the area. North Bay is a huge modern airport with a 10,000 foot main runway and a 4,500 foot cross runway, as well as former military hangars and state-of-the-art facilities. A good local employment base is also available from Canadore College aerospace program graduates. 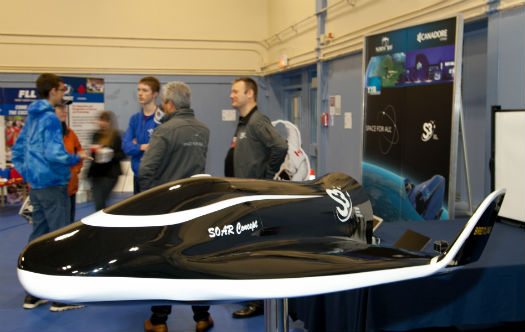 S3 Swiss Space Systems Sub-Orbital Resuable Shuttle (SOAR), designed to be launched from the back of an Airbus A300, was discussed.
Numerous speakers presented at industry day. Robert Feierbach, head of Swiss Space Systems (S3) USA, updated news about the company’s Sub Orbital Aircraft Reusable (SOAR) shuttle program. S3 has been working with the City of North Bay, Canadore College and other regional supporters to bring a sub-orbital launch initiative to Northern Ontario.
The concept would see a large lifting body carrying an up-to 250 kilogram satellite launch off the back of an Airbus A300 airliner S3 recently acquired. The lifting body would be about five metres long and would carry the satellite to a 700 kilometre altitude. Sub-scale models will be tested in North Bay including drop and recovery tests from 25,000 feet, and swing tests under a helicopter. The system is reusable, thus reducing costs. The A300 will also be used as a zero gravity lab, and will hopefully be operating from North Bay in 2016.
Capt. Thomas Earle, space officer with 21 Aerospace Control and Warning Squadron, highlighted the achievements of the Canadian Space Surveillance System (CSSS), including the Sapphire satellite project, the satellite control and data processing centre and the Sensor System Operations Centre (SSOC) attached to the 21 Squadron located within 22 Wing/CFB North Bay.
Dr. Bradley Wallace of Defence Research and Development Canada (DRDC) detailed the latest trends and technology to track movement in space by highlighting operations from High Earth Orbit Space Surveillance (HEOSS). The keynote speaker was Iain Christie, executive vice president of Aerospace Industries Association of Canada (AIAC).
“What we’re trying to do is create that interest – to create awareness,” said Mayor Al McDonald, who co-chaired the activities with Canadore College president George Burton.
“We’re getting in on the ground floor as this industry grows,” said McDonald, highlighting commercial space travel and the efforts of some companies to make it attainable as an example, and for local and international businesses to consider establishing themselves in North Bay.
Community Day
Saturday saw the most famous Canadian in the aerospace industry attend YYB North Bay Space Week. Retired colonel Chris Hadfield is one of Canada’s most famous astronauts, the only Canadian to command the International Space Station, as well as an accomplished RCAF CF-18 pilot and test pilot.
Hadfield was given extensive tours of the aerospace facilities at North Bay airport and 22 Wing. In the 22 Wing Canadian Forces Museum of Aerospace Defence, he was captivated by a striking image from his past. On the wall was a detailed pen and ink drawing by CFB North Bay’s former photo arts department graphic artist Mario Mascioli.
The dynamic image was of the first ever CF-18 interception of a Russian Bear Bomber in June 1985, flown by then Capt. Chris Hadfield and another CF-18 pilot. Hadfield was so impressed that he took a photo of it with his phone and said he wished he had a copy of it.
The Wing made it happen, and it was presented to him at the end of his very interesting sold-out presentation which filled the Capitol Centre event theatre in downtown North Bay on Saturday evening.  A t-shirt with YYB Space Week logo was also presented to him by a 1305 Robot.
Hadfield closed his presentation, and YYB North Bay World Space Week, singing a couple of songs with Sean Kelly, a local North Bay musician. The two songs’ videos reached viral status online during Hadfield’s stint as commander of the International Space Station: Hadfield’s own “I.S.S. (Is Somebody Singing),” and space culture classic, David Bowie’s “Major Tom.”
The week’s events were interesting and diverse. Unfortunately the final act was hampered by cloudy weather. The North Bay Astronomy Club had planned to operate an evening of stargazing with their many different telescopes at the North Bay waterfront. Still, YYB North Bay World Space Week was deemed an unparallelled success and will hopefully be celebrated in North Bay again in the next year. 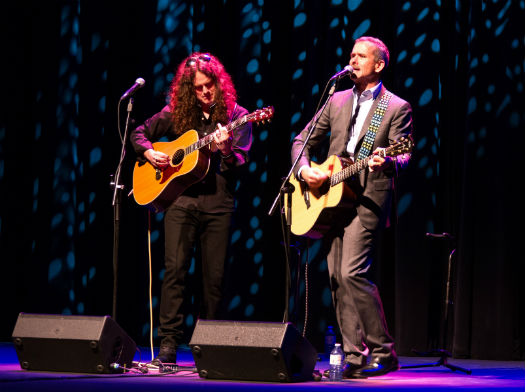