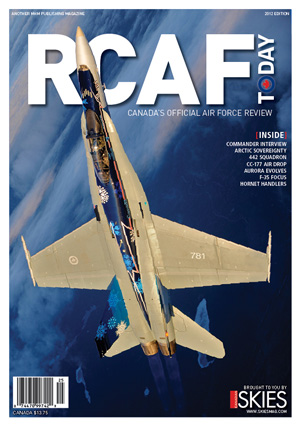 KITCHENER, ONTARIO MAY 22, 2012 – Canadian Skies, Canada largest and most-read aviation industry magazine, will be releasing a special edition, RCAF Today, at the CANSEC show in Ottawa, Ont., May 30-31, 2012. CANSEC is Canada leading defence and technology showcase, attracting audiences ranging from government agencies to aviation enthusiasts.
RCAF Today delivers exclusive stories about Canada air force and its people, missions and aircraft. Officially endorsed by the RCAF, this special edition magazine is packed with the stunning, jaw-dropping photography that is the hallmark of Canadian Skies. Stop by CANSEC booth #232 to pick up your copy of RCAF Today, enter our special draw, and meet our publishing team. We’ll also have a limited number of Canadian Skies’ custom-designed RCAF fleet posters available for military aviation fans.
Launched in September 2011, Canadian Skies has risen to the top of the Canadian aviation publishing industry in less than a year, with an audience of 29,000+ digital and print readers. For more information about the publication, to read the latest issue, or to brush up on aviation news, visit skiesmag.com.
About MHM Publishing
MHM Publishing is a family-run publishing firm founded in 2002 by husband and wife duo Mike and Linda Reyno. The company employs a core 14-person staff, as well as nearly three dozen contracted, regular contributors. With a focus on aviation magazine titles, MHM publishes Vertical magazine for the North American civil helicopter market, Vertical 911 for the parapublic helicopter industry, and Canadian Skies for the Canadian aviation market.
The MHM family of aviation magazines, along with the as-it-happens exclusive online coverage provided on the Vertical and Canadian Skies websites, remains committed to delivering current and relevant stories from the front lines of the aviation industry. From timely news and key insights, to stunning photography and unique stories, MHM team of contributing editors travel the world to bring readers the stories that affect their operations.
Latest HeliTrader Listings