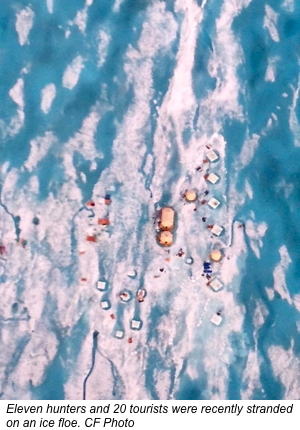 Working in close coordination with the Royal Canadian Mounted Police, Emergency Measures Organization Iqaluit, and other partners, the Canadian Armed Forces helped rescue 11 hunters and 20 tourists stranded on an ice floe in Admiralty Inlet, near Arctic Bay on Baffin Island.
On June 25, at 7:30 a.m. Eastern Daylight Time (EDT), Joint Rescue Coordination Centre Trenton received confirmation from the Government of Nunavut that rescue support was required and Royal Canadian Air Force aircraft were airborne shortly thereafter.
The stranded groups were located by a CC-130 Hercules aircraft at approximately 3 p.m. EDT, June 25, and were eventually extracted from the scene by two CH-146 Griffon helicopters by approximately 6 p.m. EDT on June 26. The CH-146 helicopters were in the Eureka, Nunavut area on an unrelated operation.
“A rescue of this scale in such a remote location requires careful coordination with many organizations in Canada’s search and rescue system,” said the Honourable Peter MacKay, Minister of National Defence. “Thanks to the dedication of our men and women in uniform, and to all agencies involved, these people can return safely to their families and loved ones.”
“This is one of the largest Arctic rescues the Royal Canadian Air Force has been involved in,” said Major-General Pierre St-Amand, Commander of 1 Canadian Air Division, Winnipeg, Manitoba. “Our crews continuously train to operate effectively in Canada’s North and today that training helped save lives. I am very proud of the hard work our men and women put into this rescue effort.”
Multiple air assets were deployed in support of this rescue including:
• A CC-130 Hercules from 435 Transport and Rescue Squadron out of 17 Wing Winnipeg, which was the first rescue aircraft to arrive on scene. This aircraft dropped survival equipment including three 20-person life rafts and a satellite phone, and later provided top cover for the helicopter extraction.
• A CH-149 Cormorant helicopter from 103 Search and Rescue Squadron out of 9 Wing Gander was sent to assist with the extraction in the event that hoist capabilities were required.
• A CC-130 Hercules from 424 Transport and Rescue Squadron out of 8 Wing Trenton was sent to provide top cover and drop additional survival equipment, as required.
• Two CH-146 Griffon helicopters from 438 Squadron in St-Hubert, QC, that were working out of Eureka, Nunavut, on an unrelated mission. Although not configured for SAR, these Griffons were essential to the rescue effort.
• A CC-130 Hercules from 413 Transport and Rescue squadron out of 14 Wing Greenwood that brought a second Cormorant crew to relieve the helicopter crew from Gander.
News from the Web

Region breaks ground on airport expansion, which will double its size

Lead plane of the Allied forces on D-Day nearly died in Oshkosh, lives on at EAA Airventure

EAA WomenVenture brings together female aviators from all over the world