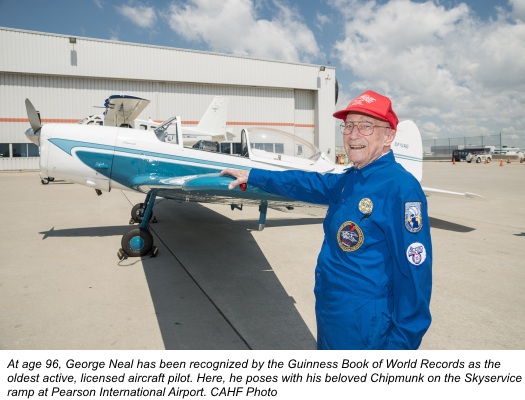 George Neal, a career de Havilland Aircraft of Canada test pilot and amateur aircraft builder, has entered the Guinness Book of World Records as the oldest active, licensed pilot on Earth, at 96 years and 194 days as of his qualifying flight June 2, 2015.

Joining de Havilland on a permanent basis in 1947, Neal participated in the certification of many aircraft types, including commanding the first flights of the DHC-3 Otter, CS2F ‘Tracker’, DHC-4 Caribou, as well as being a member of the test pilot team on DHC–1 Chipmunk, DHC-2 Beaver, DHC-6 Twin Otter, DHC-5 Buffalo, Dash 7 and Dash 8. In total, Neal has logged more than 15,000 hours on 150 aircraft types.

Neal flies his own Chipmunk (CF-JAG) from Brampton airport on the outskirts of Toronto. In this aircraft, Neal has logged 250 hours aloft since 1992. This Chipmunk was initially part of the RCAF training fleet. Designed in Canada, and produced there as well as under license in the U.K. and Portugal, 1,283 were built between 1946 and 1956.

Following Neal’s record-setting flight from Brampton to Pearson International Airport, where the Chipmunk was put on display for the 2015 Induction Gala of Canada’s Aviation Hall of Fame, the Guinness record application was put forth by Tom Appleton, chairman of the Hall of Fame.

“George’s experience is unparalleled in the world of aviation, I believe, holding a Canadian pilot’s licence from 1936 until now,’’ Appleton said. “He is as tireless as he is professional, and we are proud of his airborne exploits, which seem to go on indefinitely.”

As well, Neal built a First World War Sopwith Pup fighter aircraft from original plans and drawings, and flew it to Rockcliffe Airport (CYRO) in Ottawa, home of the Canada Aviation and Space Museum, where he was chief test pilot for many years. He also restored a Second World War Hawker Hind biplane fighter; both aircraft are now part of the museum’s permanent collection.

He was inducted into Canada’s Aviation Hall of Fame in 1995. His complete profile can be seen here: http://www.cahf.ca/members/N_members.php

“Flying has been a part of me for most of my life, and I believe it has kept me able to do what I like best. I plan to continue to fly my Chipmunk for a long time yet,” said Neal.