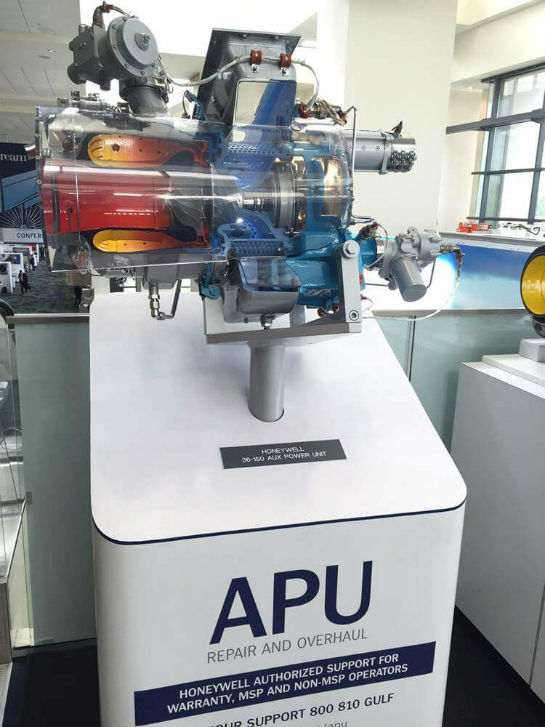 An APU provides air conditioning, electricity and the power for engine starts for an aircraft on the ground. Gulfstream Aerospace Corp. Photo
Gulfstream Aerospace Corp. has announced that its auxiliary power unit (APU) repair and overhaul department recently completed its 1,000th APU repair.
“Beginning with the opening of our APU test cell in March of 2009, we have built our APU department into a world-class group that can repair more than 30 APU models found in the aircraft of 10 different fixed-wing and rotary-wing manufacturers,” said Derek Zimmerman, president, Gulfstream Product Support. “Reaching the 1,000th APU repair milestone in such a short time demonstrates the expertise, efficiency and reliability of our team.”
An APU provides air conditioning, electricity and the power for engine starts for an aircraft on the ground. It also serves as a backup power source when the aircraft is in flight.
The Savannah APU shop, located in the Gulfstream Savannah service centre, performs the bulk of the company’s APU maintenance as one of five authorized repair facilities worldwide for Honeywell, the industry’s leading APU manufacturer. The shop includes a team of seven APU technicians and a quality control inspector.
Team members also work in Gulfstream Savannah’s APU test cell, a 308-square-foot (29-square-metre) facility that was recently upgraded.
Savannah’s entire cutting-edge APU operation—shop and test cell—is now certified for the repair, inspection, maintenance and overhaul of the Honeywell 36-100, 36-150, RE100 and RE220 series, which includes APUs for all large-cabin Gulfstream aircraft as well as the G280 and G200; Dassault Falcon 20/50/900/2000/7X; Bombardier Global Express, Challenger 300/600/601/604/850; Learjet 45; Cessna Citation VI/VII/X/Excel/Sovereign; and some models manufactured by Hawker Beechcraft, Dornier and Saab.
Gulfstream Savannah recently added a fuel nozzle test bench, which enables on-site inspection of that component.
The Gulfstream service centre in Appleton, Wis., is certified to work on APUs manufactured by Hamilton Sundstrand. These can be found on several aircraft, including the Cessna Citation 650, Learjet 60 and some Falcon 50s.
Gulfstream Savannah and Appleton’s comprehensive APU department includes the latest borescope test equipment, exchanges and rental APUs for Gulfstream and non-Gulfstream aircraft, and more than $18 million in spares inventory.
Over the last four years, the Gulfstream APU team has reduced its repair time from the industry average of more than 30 days to less than 10, thanks to the continuous improvement culture at Gulfstream.
“Their incorporation of Lean Six Sigma principles has helped make them a model of efficiency,” Zimmerman said.
News from the Web