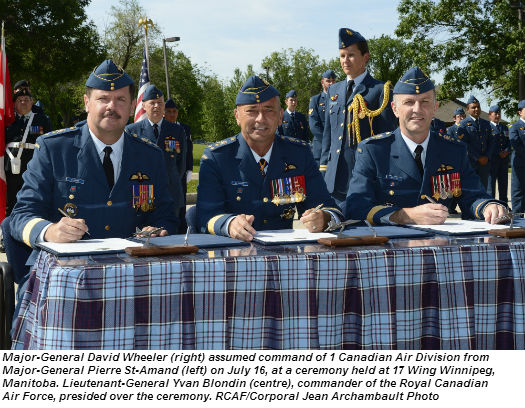 Major-General David Wheeler assumed command of 1 Canadian Air Division and the Canadian NORAD Region (1 CAD/CANR) from Major-General Pierre St-Amand on July 16, at a ceremony held at 17 Wing Winnipeg, Manitoba.
“Major-General St-Amand has done an outstanding job as commander overseeing readiness levels for our two no-fail missions, namely NORAD and search and rescue,” said Lieutenant-General Yvan Blondin, commander of the Royal Canadian Air Force.
“These are two missions with the highest readiness levels of any command within the Canadian Armed Forces. I am pleased, and confident that Major-General Wheeler is superbly equipped and ready to take command of this vital organisation.”
Major-General St-Amand has accepted a posting to Colorado Springs, Colorado, where he will serve as the operations officer for all North American Aerospace Defense Command (NORAD) activities. In the last two years, while commander of 1 Canadian Air Division and Canadian NORAD Region, he has played an essential role in the many successes of the Royal Canadian Air Force (RCAF).
“All of our successes have been due to our personnel and their tireless efforts. Whether it’s saving lives in search and rescue or helping with emergency evacuations from forest fires, to conducting missions in Afghanistan, Mali, the Philippines or in Romania over the skies of Europe; our personnel, both military and civilian, have made all the difference in Canadian Armed Forces operations all over the world,” he said.
Major-General Wheeler is an accomplished fighter pilot with over 4,000 hours of flight time. He served as the deputy director of the Air Operations Control Centre with the International Security Assistance Force in Afghanistan from December 2008 to June 2009. He has been the deputy commander of 1 Canadian Air Division during the past year and was promoted to his current rank on July 7, 2014.
“In the year that I spent as deputy commander here, I am very much aware of the high calibre support that the RCAF continues to deliver at home and worldwide,” said Major-General Wheeler. “I am deeply humbled by the privilege of serving with a robust 1 Canadian Air Division, with its great team of people across Canada. The way 1 CAD conducts business today has evolved dramatically in how we deliver our mandate. Our working relationship with NORAD, which is already strong and unique, will grow even stronger.”
Quick Facts
Latest HeliTrader Listings

No injuries reported after American Airlines plane veers off runway