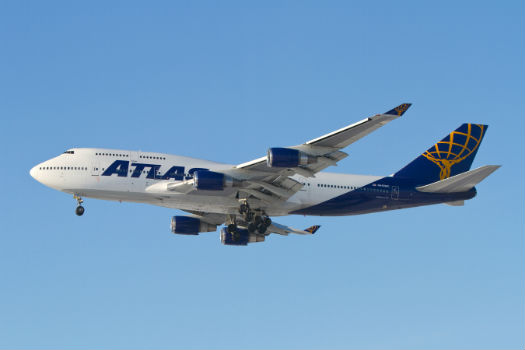 WestJet chartered an Atlas Air Boeing 747-400 jumbo jet on Jan. 9, 2014, to alleviate a huge backlog of passengers stranded at Toronto Lester B. Pearson International Airport. The Greater Toronto Airports Authority ordered a ground stop to operations on Jan. 7, due to extreme cold conditions which wreaked havoc at the airport, causing hundreds of flight cancellations. Aprons were covered in highly reflective glare ice, and ground handlers could only work for minutes at a time, with ground support equipment failures rampant. Flights were forced to depart without baggage in many cases, and arriving flights were either diverted or had to sit for hours awaiting gates. Pearson was full of stranded passengers for several days. WestJet alone cancelled a total of 192 flights system-wide since Monday, affecting more than 22,000 passengers.
The WestJet relief 747 flew from its home base at Houston George Bush Intercontinental Airport  to Toronto, where it picked up hundreds of passengers and continued on to Calgary. The 747 departed Thursday evening, carrying almost three times as many passengers as WestJet’s largest aircraft would have been able to accommodate.
Latest HeliTrader Listings

Two aboard small plane safe after it crashes into Lake Mead

Small plane crashes into Minnesota home, killing all three aboard