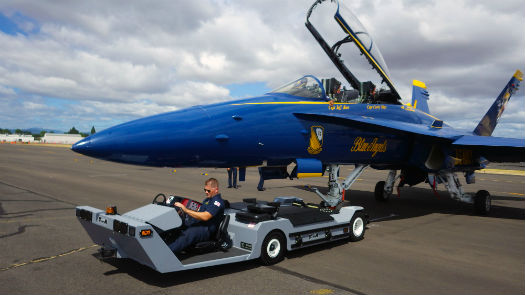 The towbarless aircraft tug was a game-changer that became Lektro’s main product from the mid-1980s to today. Lektro Photo
Eric Paulson remembers his father Wilt, co-founder of Lektro Inc., as an inventor by nature, someone who tinkered with and built things as a kid growing up in Astoria, Ore.
The elder Paulson was always working on cars and motorcycles and loved aviation from an early age—Orville Wright was one of his heroes. So it was natural that he became an aircraft maintenance technician who also taught his craft at the Oregon Institute of Technology.
When the Second World War ended in 1945 he found another natural fit, launching Willamette Aircraft and Engine Company with his wife Violet, a company that converted military aircraft for civilian use.
But they soon changed the company’s name to Lektro, and Paulson’s knack for innovation led to several new products that have helped the business evolve and thrive over 70 years.
“A lot of people would come up with ideas but didn’t have the capability of doing it themselves,” said Eric Paulson, Lektro’s owner and president since 1985.  “And he had the mechanical ability and the engineering ability. Although he didn’t go to college (to be) an engineer, he certainly had the innate ability to engineer. So he would create, and eventually created vehicles that solved people’s needs.”
One of Paulson’s early innovations was a battery-powered vehicle to feed mink, which he developed with Oregon mink farmer Paul Autio. He also produced one of the world’s first electric golf carts, collaborated on the first electric sauna bath in the United States and became Disney’s main supplier of parade float chassis. 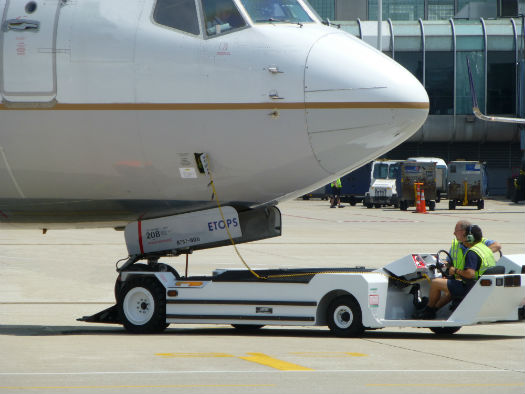 A Lektro AP8950SDB-AL-200 towbarless tug pulls a Boeing 737. Lektro Photo
But it was Paulson’s co-creation of the world’s first towbarless aircraft tug that had the most impact, a game-changer that became Lektro’s main product from the mid-1980s to today.
He and his friend Sy King, a fixed-base operator in Portland, created the tug to prevent the damage planes sometimes suffered when pulled with towbars attached to their nose gear.
King thought if there was a way to eliminate the towbar and simply lift the nose gear, the aircraft would be spared the damage. He and Paulson developed the Airporter tug by turning the Lektro mink feeder chassis around so the steer tires were at the rear, under the operator.
The drive tires were at the front of the tug, where a hydraulic lift cradle was attached. They used the cradle to raise an aircraft’s nose gear off the ground and move it around. That made the tug much safer, easier to use, more maneuverable and more universal, Eric said. “You have a direct connection with the airplane and the vehicle now.”
Paulson’s health began to suffer in the early 1980s and Eric left college to run the company. The recession impacted Lektro’s finances, but Eric used negotiation and strategic planning to turn the company around.
He has since focused the company on electric towbarless aircraft tugs, a niche where it remains the industry leader. Lektro continued to improve the original Airporter design and unveiled several improved models and chassis series.
One of the most revolutionary was the AP8800, which the company developed with feedback from Gulfstream. Its low profile allowed it to move large corporate jets from under the fuselage, making it easier to stack cramped hangars.
More than nine different model series have been introduced since the first Airporter, with countless variations within those series. There are nearly 5,000 Lektro tugs operating around the world, with big-name clients like Southwest Airlines, United Airlines and the U.S. Air Force.
Lektro developed a hydrogen-powered tug for the Air Force and plans to introduce a new diesel-electric hybrid tug this year. The hybrid is to be in use by November and will be on display at the 2015 NBAA Business Aviation Convention and Exhibition.
Eric believes his father would be thrilled about what Lektro has become, seven decades after it launched in humble circumstances, responding to a post-war need.
He’s sure the business has exceeded all expectations.
“We’re pretty proud of our past—our history and our 70 years,” Eric said. “Dad, he was way ahead of his time. He was a pioneer, without a doubt. And I think that where Lektro is today is a reflection of his kind of vision 70 years ago.” 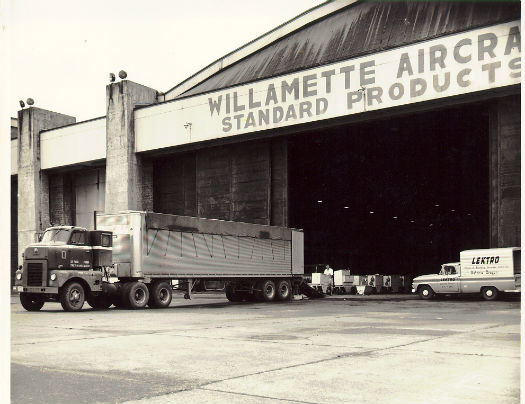 Lektro’s roots stem from Willamette Aircraft and Engine Company, which converted military aircraft for civilian use. Lektro Photo
News from the Web

Airports in the ArkLaMiss to receive federal Airport Improvement Grants