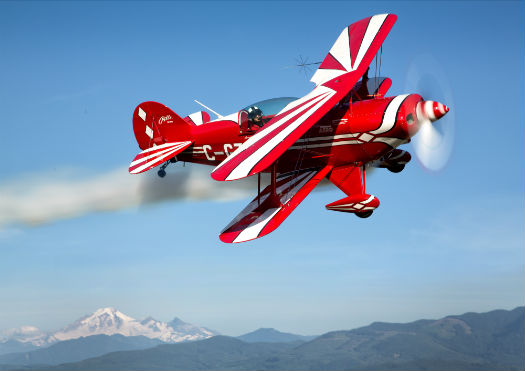 The 2014 airshow season marked the official launch of Brent Handy’s Redline Aerobatics.
There’s a funny picture of a mother and son floating around social media circles with the son saying, “Mom, I want to be a pilot when I grow up!” Mother replies, “Sorry son, you can’t do both.” Or can you?
And that’s where this story begins.
Like many others, Brent Handy discovered his passion for aviation at a very young age, growing up in the small town of Wyevale, Ont. There are countless pilots and aviation fans that will remember younger days spent watching aircraft at their local airfield. Brent is no exception, and having Huronia Airport only minutes from home probably made for a lot of trips to sit and watch the planes come and go.
“When I was a kid, I had basically set my sights on what I thought (at the time) was just completely out of reach,” he said. “I had never met a pilot, let alone a military pilot, and definitely not a fighter pilot. That’s what drove me through my teenage years – constantly moving towards the unattainable goal. I credit this dream for keeping me on the straight and narrow throughout my adolescence.”
In pursuit of his dream to fly, Brent joined the Royal Canadian Air Cadets. He knew this was the way to go. “It’s the opportunity of a lifetime,” he said. “Hard work in exchange for free pilot training!”
He got off to a great start by obtaining his glider wings with regional honours, and then quickly made his way to a private pilot’s licence. Paying his way through college as a part-time glider pilot instructor and tow-plane pilot eventually led him to enrollment with the Canadian Forces pilot training program.
In 2003, Brent got his CF Wings and in the process, he earned the coveted Golden Centennaire Award for achievement of superior results in all phases of military training. In 2007, he moved to Cold Lake to train on the CF-18 Hornet, just two days after marrying his wife, Rebecca. She remembers it all very well.  “I had a great job at the Military Family Resource Centre in Cold Lake and Brent was busy with his course. We had a great group of friends there, and things were going really well. In the fall of 2007, I got pregnant; and in December, Brent graduated his Hornet course. By June 2008 we had our first child, Evan.”
At 27 years old, a husband and father, Brent achieved his unattainable goal. He became a CF-18 fighter pilot with 409 Squadron, doing a three-year tour and racking up close to 600 hours in the Hornet. For a lot of hopefuls, the dream begins and ends in the confines of the Hornet cockpit; but for some, it leads to the left or right seat of the red and white CT-114 Tutors, flown by the Canadian Forces Snowbirds—Brent’s next unattainable goal.
In 2011, while instructing on the CT-155 Hawk with 419 Squadron and expecting their second baby in February, Brent was approached to try out for the Snowbirds. Through sheer luck or some kind of divine intervention the try-outs for the Snowbirds were temporarily postponed, giving Brent just enough time at home for the birth of their daughter, Grace. He was off to Moose Jaw, Sask., just three days later, to try out for the team—a commitment that would separate him from his young family for up to five weeks. 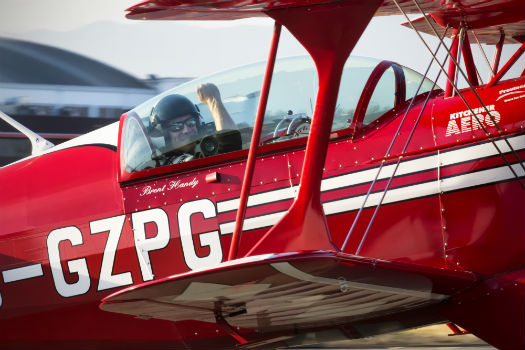 Redline Aerobatics appeared at seven shows in 2014.
“He did make it back home one time,” Rebecca remembers. “He brought a Hawk home from Moose Jaw and stayed for the weekend. I brought Evan out to the Squadron to meet him, but didn’t say anything to him in case the Hawk had broken down and he wasn’t able to make it home. When Brent walked out, Evan’s face lit up and it was the best feeling ever. Things like that make me realize how hard it must be for Brent to leave his family.”
Brent made the Snowbirds team and with that, his family moved to Moose Jaw and 431 Squadron for the start of the 2012 season. Flying lead solo, Brent logged more than 150 performances during his two years with the iconic nine-jet team, wowing crowds all across North America until the conclusion of the 2013 season. He then stayed with the team, flying as a standards pilot. Standards pilots provide, among many things, on-type formation training to new Snowbirds and recurrent aircrew training. They also assist the second-year members in training their junior partners; Brent’s focus is mostly on the solo and outer-wing pilots.
What makes this all the more impressive is that Brent was about to chase his next goal, becoming a solo sport aerobatic performer on the airshow circuit. Having always had an interest in aerobatics, Brent credits his pursuit of sport aerobatics and the Pitts Special to the flights he’d had with airshow pilots, Gary Ward (Gary Ward Airshows) and Dave Mathieson (Super Dave Airshows), both of whom were Pitts Special owners. Those flights, combined with advice from veteran Pitts pilots like George Kirbyson and Bill Carter, were all part of the research that led him to Santa Rosa, Calif., where he bought a beautiful, classic red and white Pitts S2-B. He honed his skills with Wayne Handley at his airfield in Groveland, Calif., and can’t say enough about the experience. “He’s 75 years old and he’s a machine! We had a few four-flight days of really hard acro. It was awesome!”
The 2014 airshow season marked the official launch of Brent’s Redline Aerobatics—a  one-plane, one-pilot, one-crew show out of Moose Jaw, that made its debut at the Peace Regional Airshow in Peace River, Alta.
Brent never forgets what really enables him to keep chasing his dreams. “Rebecca and my kids are amazing for helping me stay true to myself and letting me continue driving towards these amazing experiences,” he said. “As much as I’d love to say, ‘Oh yeah, Rebecca is just so happy that I fly away to airshows on the weekends to follow my dreams,’ the reality is that it’s very challenging for our family. I really do believe that it’s quality over quantity, and sometimes being away a little here and there actually strengthens the bond with my kids—but it’s so hard to know that I leave Rebecca to parent on her own for those weekends I’m gone. She, like so many other military spouses, are the true unsung heroes who enable their partners to do their jobs.”
The upside for Brent is that he’s not going about this on his own. His long-time friend, Wade Bowman, has been helping him out on the road.
“Wade is from Edmonton. He’s a 737 captain with Canadian North, a chief pilot on the Dash 8, and we’ve been buddies since boot camp. This industry fosters such great friendships that last over thousands of miles.” 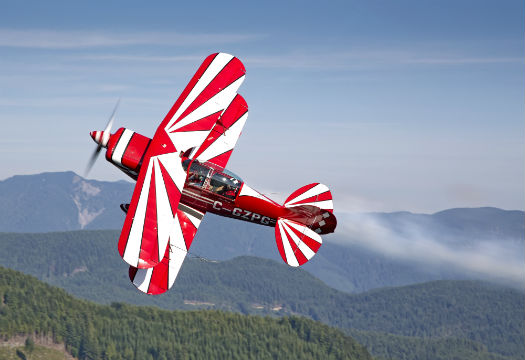 Brent Handy balances Redline Aerobatics with a full-time military career.
Brent’s first season saw him travel back and forth across Canada to Abbotsford, B.C., and Bromont, Que., with stops in the United States for shows in Oregon and then Duluth, where he actually took on the Shockwave jet truck in a race! Redline Aerobatics appeared at seven shows in 2014, before ending up back home in Moose Jaw in time for Brent to fly in a two-ship formation commemorating the 50th anniversary of the CT-114 Tutor during the Snowbirds’ season finale.
Redline Aerobatics’ first season is in the history books, and Rebecca is not the least bit surprised at the outcome. “My initial reaction was the same as his trying out for the Snowbirds; but somehow Brent managed to buy a Pitts, start up a business, land some airshows and, not surprisingly, do this whole entrepreneur thing amazingly well.”
Balancing a full-time military career with a new airshow business is a lot of work, but when you have a wife and two kids at home it really does beg the question: how do you balance it all? The Ray-Ban Gold Aerobatic Team often did 20 or more shows each year while working as full-time airline pilots, some with family at home. Team founder, Bill Cowan, pondered that same question and smiled. “We did it by being home three days a month.”
Obviously, you really have to want it. Having completed two seasons with the Snowbirds, this wasn’t going to be unfamiliar territory for Brent’s family, but the commitment level is every bit as high despite not planning to be on the road as often. This year has already seen a successful trip to the International Council of Airshows (ICAS) conference, with Brent taking on the additional role as 431 Squadron’s operations officer. With spring training for both the Snowbirds and Redline Aerobatics fast approaching, it’s sure to be a steady diet of spirited flying between a CT-114 Tutor and the Pitts S2-B as preparations for the 2015 season begin.
Reflecting on a lifetime spent chasing his “unattainable goals,” Brent acknowledged the people who supported him. “I’m extremely thankful to my parents, sisters, the entire family actually. They’ve all really supported me over the years. My wife, Rebecca, and children, Evan and Grace. I feel very lucky to be able to help my kids learn the value of dreams, passion and persistence. I’m also grateful to have been born Canadian with all the opportunities we have, regardless of our background. I’m proud of my accomplishments, but I think it’s important to remember that all of us achievers come from normal lives; that we’re just normal people with normal day-to-day struggles. I’ve achieved many of my dreams, and I can say that as fulfilling as it is, we really just have to learn to be happy in the moment. It’s something I’m still working on! It’s hard to find that balance between dreaming of tomorrow and living happily in the present. Life is so short and I want to take experiences and relationships to the grave—not dreams.”
What’s the next goal for Brent? Maybe it involves sailing, his other passion, as he hints at family global circumnavigation by sailboat!
Latest HeliTrader Listings