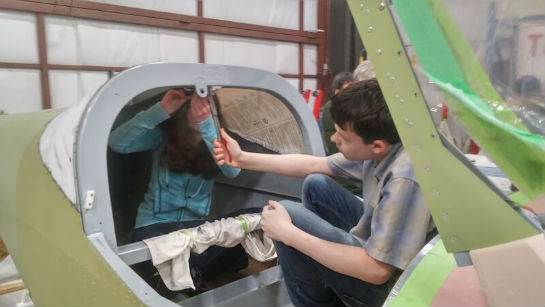 Teen Flight Campbell River meets twice a week to build a two-seat Van’s RV-12 plane using component parts, with students doing most of the work. Teen Flight Photo
Bill Alder launched Sealand Aviation in Campbell River, B.C., in 1981 to provide maintenance for floatplanes in the forestry and fishing industries on Canada’s west coast.
Over the next 35 years he grew the business into a group of companies that overhauls, rebuilds, salvages and repairs aircraft and also manufactures aircraft modification kits and components.
He has about 50 employees and hires “pretty much on a continuous basis,” he said. But it’s getting harder and harder to find workers.
“We had this huge gap where nobody got trained and nobody got into the industry,” said Alder, 67, who is also a pilot and aircraft maintenance engineer.
“What I found was that, unlike when I was growing up—you know, when you saw an airplane you were just awestruck.
“People are bombarded with airplanes constantly now. They ride airplanes like buses, so the romance is almost gone. For the most part, people no longer have a passion for aviation and don’t get into the industry.
Alder diagnosed the problem years ago and found a possible solution in a conversation with Ted Millar, a Sealand customer who also runs the Teen Flight outreach program in Hillsboro, Ore.
Teen Flight tries to get kids interested in aviation by letting them build a two-seat Van’s RV-12 airplane using component kits, with guidance from mentors. 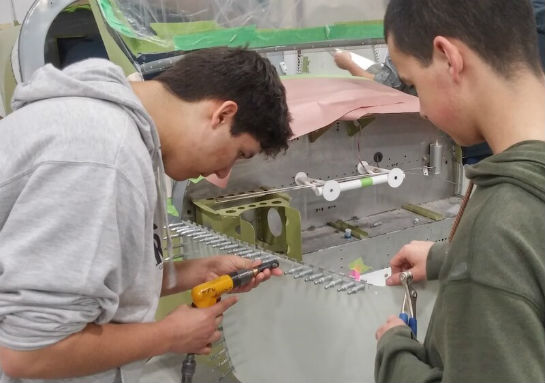 Teen Flight Campbell River hopes to complete its RV-12 by mid-July, let students fly in it, then sell the plane and use the proceeds to buy another airplane kit. Teen Flight Photo
Alder created a Teen Flight chapter in Campbell River in 2014, with about 10 students and a dozen mentors with varied aviation experience. One is an Air Canada pilot and one is ex-military, but others are hobby pilots and RV kit builders who come from other professions.
“It’s just a general cross-section of local people,” said Alder. “We have a lot of experience and a lot of guys that are into aviation.”
The group meets twice a week to build the RV-12, with students doing most of the work. Alder has seen them grow from individuals who didn’t know how to pull a rivet or file a piece of metal into a skilled team, united in a common goal.
“It’s been very satisfying watching these kids change and how they interact with each other and how they interact with the mentors,” he said.
“They’re asking intelligent questions now, where before they were afraid to even ask a question. Their skill level, of course, has gone up astronomically. And some of them—not all of them—are now thinking of careers in aviation.”
Along with practical skills that would serve them well in aviation, they’re also learning teamwork and communication skills that transfer to other disciplines. 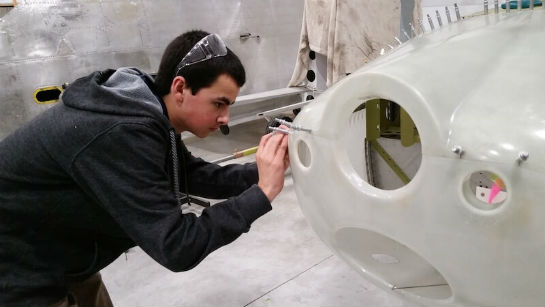 Some of the students may stay on for the second build, and some may become mentors themselves. Teen Flight Photo
“It’s definitely widened my view in the world of aviation as well,” said Nick Askey, 16, a student member of Teen Flight Campbell River and an aspiring pilot.
“I’ve learned a lot more of what goes on, and it’s really exciting for me. And being around people like Bill every once in awhile, it’s great. You learn so much from them.”
Teen Flight Campbell River hopes to complete its RV-12 by mid-July, let students fly in it, then sell the plane and use the proceeds to buy another airplane kit.
“It’s not a one-shot deal,” said Alder. “This is a continuing, long-term commitment by everybody involved to build an airplane, sell an airplane and get more kids in and just keep it going.” 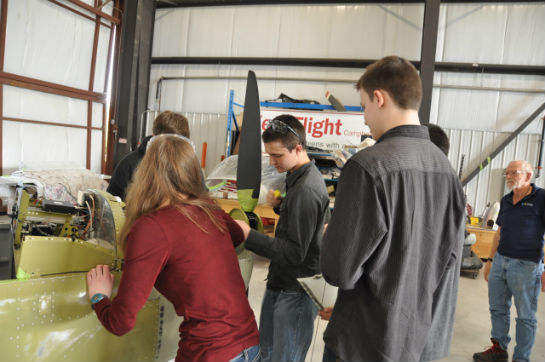 Teen Flight Campbell River has about 10 students and a dozen mentors with varied aviation experience. Teen Flight Photo
Some of the students may stay on for the second build, and some may become mentors themselves. The hope is they’ll acquire the passion for aviation Alder set out to instill in them two years ago.
“We’re getting there,” he said. “And of course, all the kids are different. Some of them are extremely passionate about it. Some of them, there are areas of it that they’re very focused on.
“We have one young guy who’s into computers and electronics and that, and his skills go where they need to go—right into doing the avionics installation in the aircraft.”
Maybe they will become aviators and work for companies like the one Alder created 35 years ago in their hometown. He easily summed up the most rewarding part of the process.
“As a mentor, every day is rewarding—seeing it happen and realizing that it’s a very good organization and it’s going to work,” he said.
“And the satisfaction with the kids and the satisfaction from the industry and the local community—recognizing what an opportunity it is for these kids.”
Latest HeliTrader Listings