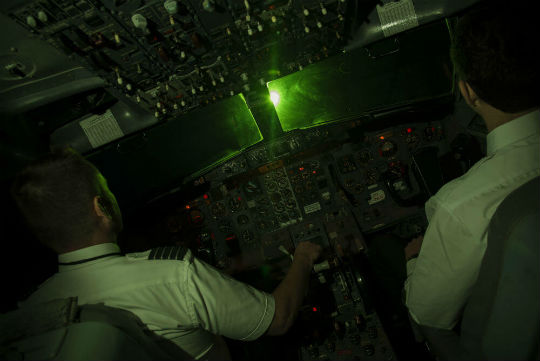 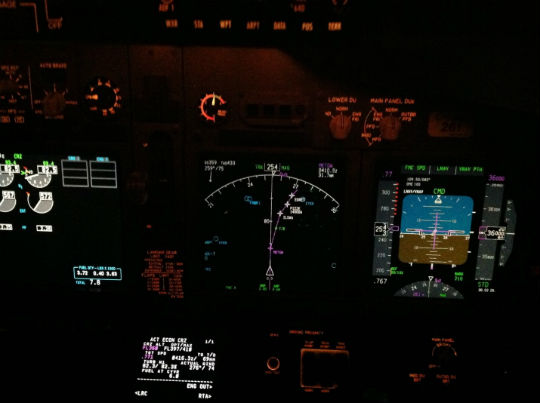 Before glasses: A cockpit view without LaseReflect Aviator HD Glasses. Iridian Photo
“That was the start of our eyewear,” said Robert Bruce, the company’s vice president of business operations. “In 2011, we were approached by SBB Swiss Federal Railways to see if we could make some laser safety glasses. We produced some glasses for them, to protect train operators from laser pointer attacks.”
The following year, the Canadian Aviation Safety Officer Partnership (CASOP)—a national organization of safety professionals representing all sectors of Canada’s diverse aviation industry—suggested that Iridian look into developing glasses that would repel laser light, thereby protecting airline pilots from laser attacks.
Bruce said the company spent a great deal of time researching the issue, confirming that green lasers were the most prevalent in the attacks.
“We made a prototype, but needed to test it in the air,” he continued. “So, we contracted with the National Research Council of Canada (NRC) to do in-cockpit ground and flight testing. We had to be sure that when wearing the glasses, pilots could still see and recognize the colours of cockpit panel lights, as well as airport directional lights, and the lights of other aircraft.”
Once NRC feedback was obtained, the glasses were further refined and released to the market as the LaseReflect Aviator HD Glasses. All in all, Bruce said product development took close to four years, with the eyewear undergoing continuous improvement.
Priced at $329 per pair, the LaseReflect glasses feature high quality glass lenses in an aviator-style frame that is compatible with headsets, helmets and earpieces. The glasses, which are designed to be worn from sunset until dawn, allow pilots to maintain good visibility while screening out harmful green laser light. 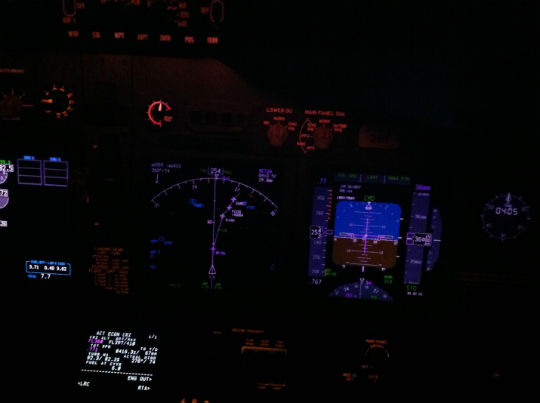 After glasses: The view through LaseReflect glasses. Iridian Photo
Iridian has also created a clip-on version of the reflective lenses for pilots who wear prescription eyewear.
So far, the company has sold about 150 pairs of glasses to the Canadian military as well as individual commercial pilots. User feedback has been positive.
“We usually hear from individuals once they’ve experienced a strike and want to prevent another,” said Bruce.
So far, airlines have not purchased any glasses, but he said that is likely because clear guidelines about what constitutes acceptable laser glare protection do not exist.
“That’s probably going to change,” he said. “There is an FAA committee underway to produce a document that will give us some of those guidelines. I think that will help a lot. CASOP is also trying to work on a solution. Industry is definitely trying to catch up to this problem.”
Iridian hopes that one day, its glasses will be standard cockpit equipment.
In a related development, a ground-breaking study performed by the Cumming School of Medicine in Calgary evaluated 61 commercial pilots who experienced a laser strike between April 2012 and November 2014, for the purposes of determining whether the attacks had caused permanent eye damage. Results were published in the December 2015 issue of the Canadian Journal of Ophthalmology.
“Our study revealed that laser strikes on aircraft did not result in permanent visual functional or structural deficits,” wrote the study’s authors. “However, laser strikes cause immediate visual effects, including glare, flash blindness, and ocular irritation that can interfere with a pilot’s visual function. Given the widespread accessibility of high-power lasers and the rapid increase in incidents, laser strikes threaten to jeopardize aviation safety unless effective preventative measures are put in place.”
Those measures are under development, as the global aviation industry examines the most effective ways to combat harmful laser attacks.
Latest HeliTrader Listings