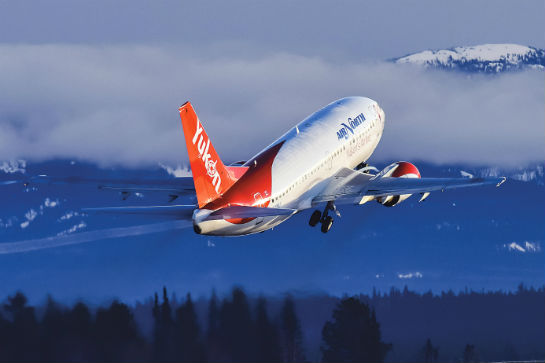 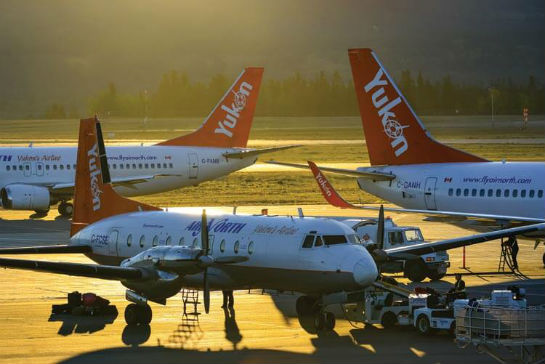 It’s a busy day on the tarmac at Whitehorse International Airport, where Air North is headquartered.
“They wanted to buy and Tom wanted to sell,” Sparling told Skies in a candid interview. “With money in the bank, they formed an investment company and looked for strategic opportunities. We were the first; they reasoned that since they were spending a lot of money on transportation, it should benefit the community and that they should have some control of the product that is so important to their everyday life.”
Then, there are the roughly 1,500 Yukon residents who seized the chance to acquire smaller equity holdings in Air North. “It’s very similar to the rationale used by the First Nation when they decided to invest,” said Sparling, admitting he hadn’t thought there would be much interest in the equity offering. But it drew “a lineup of people” and “the sentiments expressed over and over by these new shareholders were, firstly, that they saw their ticket revenues leaving the Yukon with other carriers and, secondly, that there were few local jobs.” Those local shareholders remain “very engaged,” even turning out in significant numbers at annual general meetings in Air North’s main hangar in Whitehorse.
The airline’s expansion over the years has been measured, deliberately different from how others have entered the aviation business. 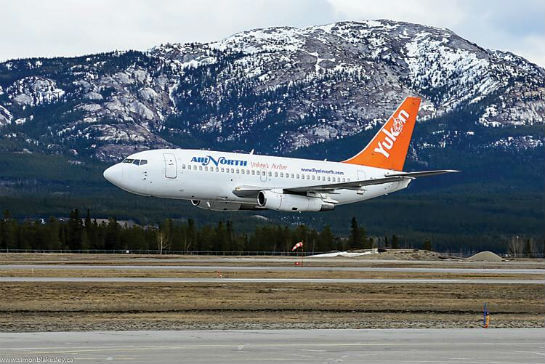 Boeing 737-200, C-FJLB, does a final flyby with gear up before circling and landing in Whitehorse for the last time.
“Often, you’ll see airlines start up overnight with one airplane and six months later they have 10, and plan to have 30 in a couple of years,” said Sparling. The result is often a huge and ultimately unserviceable debt load and then a calamitous collapse. He said Air North did take on debt when it financed its first hangar in 1979, only to see interest rates soar into the double digits when the bottom fell out of the economy. “We told ourselves that if we escaped from that, we would never get ourselves heavily into debt again. We try to remain, for the most part, debt-free.”
Air North grew steadily through the 1980s, acquiring a range of different aircraft (Douglas DC-3s and a DC-4, as well as sundry Cessnas and Beechcraft). Piston-powered aircraft were replaced with turboprops in the 1990s as the company, formally known as Air North Charter and Training Ltd., adjusted to cyclical demands. Its first jets, two Boeing 737-200s, arrived in 2002 as Air North went head-to-head with the mainline carriers on routes to and from southern Canada. 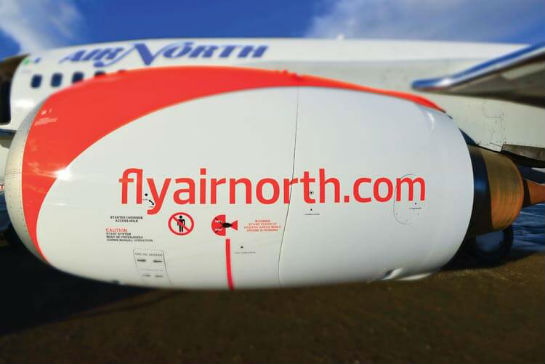 The airline’s latest livery is displayed on its newest Boeing 737-500.
When Air North launched jet service, they were “the new kids on the block” because Whitehorse was already being served by one mainline carrier. “They were certainly very aggressive with us to start with—and they remain aggressive,” said Sparling. Then, a second mainline carrier arrived in 2012, and “for a period of time it was the two big guys having a gunfight in our backyard, as we tried to keep from becoming collateral damage in the crossfire.”
But, buoyed by the support of Yukoners, Air North persevered. The calculated gamble paid off, in that nearly 60 per cent of passengers travelling through Whitehorse in 2015 preferred to fly with “their” airline. 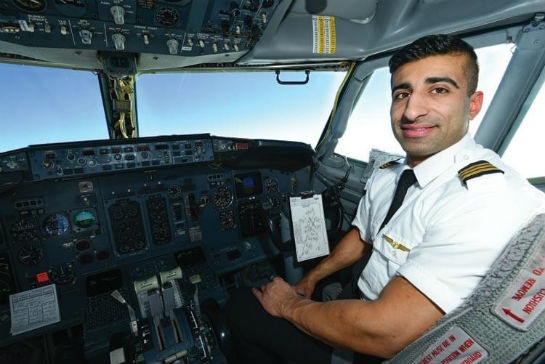 First Officer Joban Badyal on the inaugural flight from Whitehorse to Yellowknife and Ottawa on Feb. 6, 2014.
“Absolutely!” said Sparling, when asked whether Yukoners have a proprietary attitude to Air North. “I look at our product as locally owned and produced,” he added. “There are lots of goods and services that people in the North import or outsource, so anything that can be produced locally is a feather in our cap with respect to the economy.”
Continued change saw the addition of larger and more modern 737s and the retirement of the 200s. This necessitated expansion of the Whitehorse base, which now includes the original hangar (housing flight operations and the cargo centre), two larger hangars, a reservations and administration building, a fuel tank farm, and in-house catering and cabin services. Secondary bases are at Vancouver International Airport and Dawson City Airport.
Staff Stability
With about 250 employees in the Yukon, including more than 60 pilots and other aircrew as well as maintenance, ramp and administrative staff, Air North is a significant part of the territory’s economy. And, importantly, it has a comparatively stable workforce. 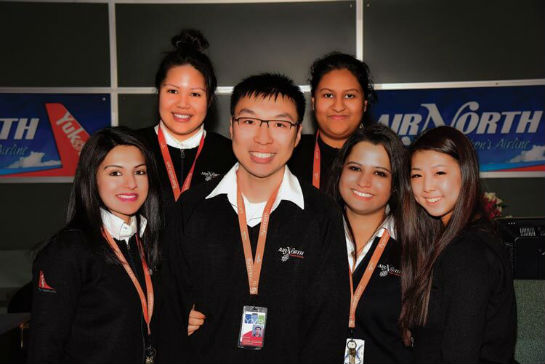 Air North employees are known for serving up legendary Yukon hospitality.
Whitehorse-based personnel tend to prefer the unique challenge of northern operations and the northern way of life. Even if they’re not from the Yukon originally, they almost invariably become committed Yukoners, growing roots and starting families in the territory.
“I think in the last 15 years or so, we’ve had only a few pilots leave,” remarked Air North president Joseph Sparling. Pilots in the company tend to begin relatively young. Initially, they work in non-flying roles, primarily on the ramp. After a couple of years, when an opportunity opens up, they are given the chance to resume their flying careers in the right seat of one of the carrier’s turboprops (Hawker Siddeley HS-748s, soon to be replaced by ATR 42-300s). The
next step in their career progression is to the right seat of a Boeing 737 and, finally, to the left seat of the Hawker and then the Boeing.
“Most of our Boeing captains followed this path,” said Sparling. “And, most of them have been with the company for at least 10 years and have families and homes here.”
Moving with the times
Constant modernization is crucial for remaining competitive in commercial aviation—a challenge faced by all northern carriers who serve a sparsely-populated but economically important region comprising 40 per cent of Canada’s land mass. Sparling told Skies that more and longer paved runways are a critical need, as well as better links with southern transportation grids. 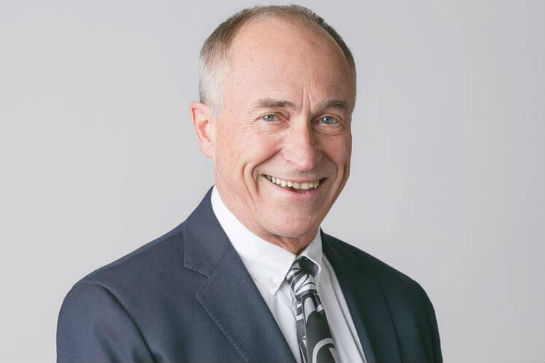 Joe Sparling is Air North’s founder, current president and CEO, and a Boeing captain. Savitri Bastiani Photo
He said the Yukon government has expressed strong interest in improved infrastructure, including a recently announced proposal to significantly improve the Dawson airport by paving the runway and rebuilding the terminal. Other governments have followed suit, in anticipation of the new federal Liberal administration’s commitment to launch a multi-billion-dollar infrastructure program.
Sparling said the fact that the relatively sheltered Yukon has the advantage of a longer construction season than the Northwest Territories or Nunavut works in its favour.
“Dawson City in particular is a strong candidate for improvement,” he added, noting that he doesn’t expect every northern runway or airstrip to be paved, but certainly the key ones, because it would mean less wear and tear on aircraft and would enable carriers to modernize their fleets, making their operations more economically and environmentally sustainable. “We could see 737 service into Dawson for at least part of the year, because peak-season traffic would justify it.” 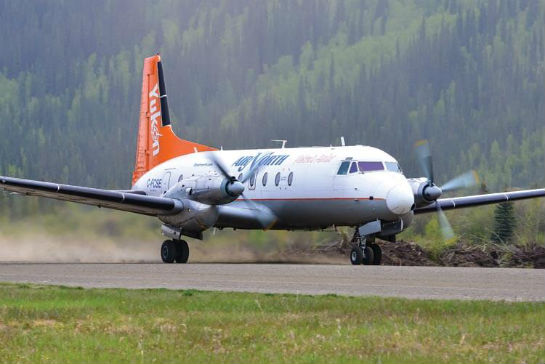 A Hawker Siddeley HS-748 blasts off from Dawson City, Yukon.
Sparling and others in the industry have also been eagerly awaiting a review of the Canada Transportation Act.
“The review may address some of the northern issues,” said Sparling. But, he acknowledged, there are other significant national issues requiring attention.
The first review in 14 years, it was begun in June 2015 by a government-appointed secretariat in which air transport was represented by Duncan Dee, a former executive vice president and chief operating officer at Air Canada.
The six-member body heard input from the Northern Air Transport Association (NATA) and individual carriers during cross-country hearings. The secretariat submitted its report just before Christmas to the new transport minister, Marc Garneau, whose office told Skies in mid-February the report would be made public when he tables it in the House of Commons no later than April 12. That would be in time for NATA’s 40th annual conference and trade show, set for April 25 to 27 in Whitehorse.
Core business
Air North’s core business is scheduled regional passenger and cargo service between Whitehorse, Dawson City, and Old Crow in the Yukon, and Inuvik and Yellowknife in the Northwest Territories, as well as “seamless” connections to points south in Vancouver, Kelowna, Edmonton and Calgary. It also has service to and from Ottawa, via Yellowknife, which Yukon Liberal MP Larry Bagnell in particular appreciates. He told Skies that until Air North inaugurated the route, it took him 14 hours to fly home on weekends via Toronto and Vancouver. It now takes a little over five hours. 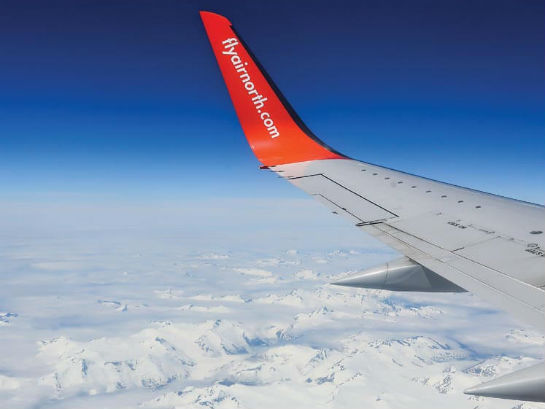 Typical view: An Air North Boeing 737-500 soars above a breathtaking northern landscape.
In addition, Air North operates regular freight trips and fuel-haul flights to Old Crow which, like many northern communities, is accessible only by air. The company also flies several regular charters for resource companies, exclusive fishing lodges, and cruise ship operators, as well as seasonal vacation flights to Las Vegas, Nev.
Beyond flying, Air North provides fuel services in Whitehorse, as well as ground handling services in Whitehorse, Vancouver, and Edmonton for a wide range of airlines including Condor, United, American, AeroMexico, Alaska, and KLM.
Air North, like many carriers, has had to do a fair amount of juggling to deal with the cyclical and seasonal nature of its business. Curiously, though, it has had some of its best years during economic downturns. “Our demand is somewhat stable,” said Sparling, pointing out that while the economy has slowed again, northerners continue to travel. It could be argued that for them, it’s a necessity of life.
“We have an ability to cope with economic cycles; they’ve always been here. We’re used to it in our regional operations where the cycles are more seasonal. Economic cycles on top of the normal seasonal cycles don’t create any huge challenges for us, because we can always reduce or add capacity as required,” he concluded.
Editor’s Note: The magazine “Yukon, North of Ordinary” was created in 2007 for Air North by Harper Street Publishing, Inc. For more information, click here.
News from the Web