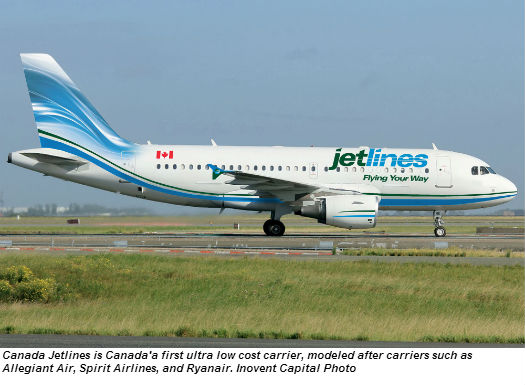 David H. Brett, CEO, Inovent Capital Inc. (Inovent) is pleased to announce that it has entered into a letter of intent (LOI) with Canada Jetlines Ltd. (Jetlines) pursuant to which the parties agree to negotiate the terms of a business combination transaction (the “Proposed Transaction”). Inovent is a capital pool company in accordance with the policies of the TSX Venture Exchange (TSXV). Jetlines is a start-up airline aiming to become Canada’s first ultra-low cost carrier (ULCC). The Proposed Transaction will constitute Inovent’s qualifying transaction in accordance with the policies of the TSXV. Jetlines and Inovent are at arm’s length and the Proposed Transaction does not constitute a non-arm’s length qualifying transaction.
“Jetlines is well on its way to providing Canadians with an exciting and affordable new air travel alternative,” said Jetlines CEO Jim Scott. “Our proven and dedicated team has been very busy preparing to proudly serve Canada soon.”
Key Terms of the LOI
Pursuant to the terms of the LOI, the parties have agreed as follows:
The Proposed Transaction values Jetlines at $3,000,000.
The Proposed Transaction is subject to the following key conditions:
Jetlines is in the process of engaging Euro Pacific Canada Inc. to act as their exclusive investment banker, led by Euro Pacific’s Vancouver-based managing director Blair Jordan. Jordan has had extensive experience working with airlines and asset financing globally.
News from the Web