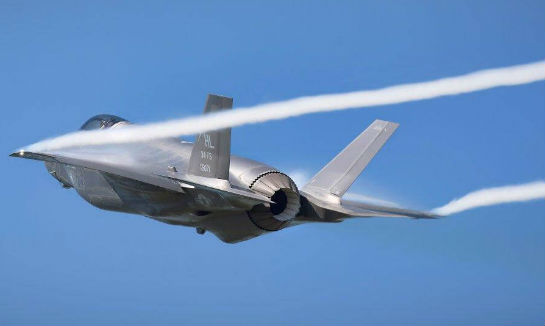 Two F-35s from the 34th Fighter Squadron at Hill Air Force Base in Utah attended the 2016 Abbotsford International Airshow. The occasion marked the F-35’s first appearance in Canada and the jets proved to be a major attraction on static display. Here, one of the F-35s is shown departing Abbotsford after the show.
Not unlike a prize fight in Las Vegas, the Abbotsford International Airshow in B.C. was the scene of a battle of sorts between two rivals vying for a potential contract to replace Canada’s aging fleet of CF-188 Hornet aircraft.
In one corner was Lockheed Martin’s F-35A Lightning II. In the other, Boeing Defense, Space & Security’s (BDS) Block II F/A-18 Super Hornet.
The airshow marked a series of firsts for Abbotsford and Canada. Boeing’s corporate Super Hornet demo jet had never been to Canada, and neither had Lockheed’s F-35—but there they were, about to be introduced to a massive Canadian audience.
“We’re very excited that Abbotsford was recognized as a stage to show off the latest in technology by some of the world’s most exciting aerospace companies,” said Jim Reith, president of the Abbotsford International Airshow.
The Abbotsford Airshow has a history of being well attended by high-profile guests such as the RCAF’s Chief of the Air Staff and was the site for the delivery of Canada’s first CC-177 Globemaster III back in 2007.
All weekend, there was speculation as to whether the F-35s from the 34th Fighter Squadron at Hill Air Force Base, Utah, would fly. However, since Lockheed does not own the aircraft and neither pilot was qualified to fly a demo, the crowds had to make do with a static display that was still a major attraction for many visitors throughout the show.
Senior Lockheed Martin F-35 experimental test pilot Billie Flynn believes it’s hard for people to distinguish one fighter jet from the next unless they get a chance to see them in person.
“They need to talk to the people who fly it and they need to see the sophistication of how it’s been built, the geometric shapes of every panel, every hinge, and then they’ll start to realize that there’s something very unique about this aircraft,” he said. “You don’t necessarily believe everything you’ve read so in our experience, it’s just very important to put it on the ground and let the public see it and talk to us.” 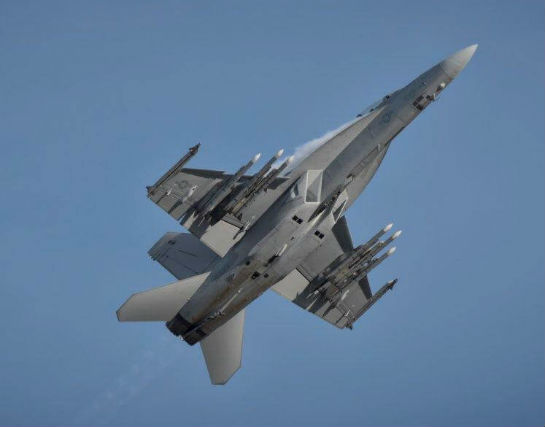 Boeing flew a U.S. Navy combat loaded F/A-18F Super Hornet during each of the three daily airshows.
Boeing placed a combat loaded F/A-18E on static display but also flew an F model, with a full combat load (inert, of course) during each of the three daily airshows.
“We had a couple of jets on lease from the U.S. Navy for the Farnborough Airshow  and felt that while we had them, there was a great opportunity to take that same demo into Canada for the people in Abbotsford,” said BDS’ senior manager of communications, Becky Yeamans. “It gave us a great opportunity to talk about advances made over the classic Hornet and demonstrate what really is a new aircraft, with a larger surface area and features like the AESA [active electronically scanned array] radar system.”
While the F-35s did not fly at the show, they did exact a measure of revenge with a high energy, low altitude pass down the north/south runway for onlookers before departing Abbotsford for Utah.
Until next year!
Latest HeliTrader Listings